If you’re at all interested in the bikepacking community or self-supported, ultra-distance bike races then Emily Chappell’s new book “Where There’s A Will” will be a gripping and emotional read and her writing is beautiful and eloquent. Go buy it now at Amazon. 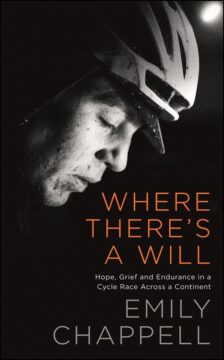 The book focuses on her experience in the 2015, ’16, and ’17 Transcontinental Races (TCR nos. 3, 4, & 5) as well as some preparatory races and everything else that was happening in her life around that time. She was the first female finisher in the 2016 TCR, but the accounts of her races contain so much more than simply how she won. I hadn’t realized how much time she had spent with Mike Hall in the winter of 2016/17 while he was preparing for the Indy-Pac race in Australia, where he tragically died. It’s therefore also a wonderful glimpse into Mike’s enigmatic personality.

If you’re looking for an independent review then sorry, I can’t offer that. The book was infinitely engaging and enrapturing for me since I personally know about half of the main characters and I was there having very similar experiences as the author during two of the main two races that she describes, never more than half a day behind or ahead of her.

Her descriptions of the emotional roller coasters that these races involve are fascinating and convey the feelings extremely well. Everyone preparing to do such a race should read and absorb all of these experiences so that they are more mentally prepared when they reach those states. Anyone not even considering doing such a race will also be fascinated by her description of these intense experiences.

It was difficult for me to re-experience the time when we all learnt of Mike Hall’s death. I knew him far less well than she did, but when it happened, it struck me far harder than I could have imagined. Seeing it again through her eyes was an emotional episode for me and I again cannot fault the quality of her writing about the experience and how it affected her. This book has therefore also helped me to move on by seeing things from another perspective. I never expected to read about those events from such a close friend; that section must have been extremely difficult for her to write, but I thank her for doing so.

In 2016, I twice had lunch with Emily, once before the start in Geraardsbergen, Belgium and again at CheckPoint 4 in Montenegro where she devoured most of two large pizzas that she’d ordered for delivery there (of which I was quite jealous) whilst I destroyed almost everything in my bags that hadn’t yet been eaten as we exchanged stories from the road (read my personal reports of the 2015 and 2016 Transcontinental Races). She mentioned at the book launch that her editors had told her to trim down the number of descriptions of food and meals in the book, so I imagine that those moments that we shared got discarded on the cutting-room floor. That’s completely understandable because what she presents as the pivotal moments of that race came just before that, on the long dirt road between Bosnia and Montenegro, and just after our encounter with her uncommon route choice via Alabania while almost everyone else went via Kosovo. Fortunately, the editors didn’t have it all their own way and people wanting to read about how much even the simplest foods can be yearned for and enjoyed during these races will not be disappointed with this book.

I not only found the writing and word choices to be exemplary, but also the style and structure couldn’t have been much better. Most other published reports of the Transcontinental Race have been mid-length articles for magazines or websites and while some of them have been very good, others have adopted the modern trend of varying the order in which events are described and hopping around the timeline to create more drama or hold the reader’s attention, which often annoys me. Fortunately, Emily does very little of this and mostly tells it is as a simple linear story, only occasionally jumping ahead before going back to fill in some details. I found this aspect to be superbly done and the timeline was varied just to the right degree.

In terms of a learning resource then if you’re looking for tips about equipment, route planning, training and all of those mundane things then you’ll find very little help from this book. If you’re looking to find out what life on the road is like in bikepacking races and how to deal with the mental and emotional battles then it would be hard to find a better resource anywhere.

In summary, although I already expected the content of the book to be engaging for me, I never imagined how well it would be written and how well it could convey so many aspects of these races and this community. I’m sure that everyone else involved in such races and the community will find it equally fascinating and I’m confident that it will also have a far wider appeal and be an enjoyable read for people who know very little of this type of cycling, because it’s certainly not about the bike.

1 thought on “Book review: Where There’s A Will by Emily Chappell”