The Transcontinental Race (TCR, official website) is a self-supported, ultra-distance bikepacking across Europe. The route is typically around 4000 km long, but the intermediate checkpoints vary each year. The clock never stops and riders must find all of their supplies at commercial sources along the route.

Because the clock never stops, riders must choose how much time to devote to riding, resting, and refueling each day. Being self-supported or unsupported means that drafting is not allowed, receiving any form of support from other racers is not allowed, nor is it from friends or family; all food, accommodation, repairs, etc., must be purchased from commercial sources.

Racer positions are monitored using GPS satellite-based tracker devices on participants’ bikes that upload their positions to the Trackleaders website for racers and followers to view.

Official reports and videos are posted by the race organizers and many participants post updates on social media, which is centered around the Facebook Group. Doug Migden gave a general summary of what it was like competing in five editions of the race (2015-19) on the Dotwatcher website.

A typical equipment setup consists of a road/racing bike with some small bags carrying a minimal amount of gear and supplies plus a good navigation device and good lighting (see Ride Far, Part II: The Bike).

Mike Hall founded the race in 2013. Mike won several of the biggest self-supported bicycle races and after doing the World Cycle Race in 2012 and the Tour Divide in 2011, he decided that self-supported bicycle racing could become popular if it fit into people’s regular holiday time and that “there was a demand growing for both a European based ultra on a similar scale to the Race Across America, and also an unsupported alternative to the race” (see Bikepacker.com). During the first leg of Mike’s global trip, he saw how impressive the cultural and geographic changes were in the relatively short distance between London and Turkey, so he decided to create a race using that route but also visiting significant places in bike racing history along the way.

Mike’s vision worked. After 30 people started the first edition in 2013, word spread and the 101 starting places for the second edition were filled within a week. For the third edition in 2015, 350 applications were received for the 250 starting places, and the number of applications went up to over 1000 by the next year and media interest kept increasing. The success of the race and the demand for other events encouraged people to organize similar events around the world.

In 2013, The Adventurists helped to organize the first race. Mike tragically died in a collision with a car during the 2017 Indian Pacific Wheel Race. Planning for the 2017 edition of the TCR was postponed while everyone mourned the immense loss and there were fears that the race would not happen. Fortunately, a team of volunteers were able to put things in place to enable the 2017 edition of the race to go ahead. Read this article on Apidura’s blog to know more about this process and the team.

In December 2017, it was announced that the race had been transferred to a not-for-profit organization run by the same people who had organized the 2017 race.

In this video, Mike shares some founding principles of the race:

Mike chose to adopt the more risky strategy for an event organizer to emphasize that the TCR is a race rather than a non-competitive challenge for reasons explained in the video below. Note that he’s still pleased that many people do approach the event as a personal challenge and that he’s happy for the two mindsets to co-exist.

The minimal rules focus on riders being self-sufficient (unsupported) and using reasonably-comparable equipment. Rather than making an almost endless list of rules to cover all scenarios, a simple set of 10 rules are explicitly stated and everything not covered by those is hopefully covered by the implicitly-understood principles of self-supported bike racing. The rules are listed on the riders’ brevet cards that they carry during the race and in the Race Manual.

The race manual elaborates on the rules a little and Mike explained why he prefers this approach instead of having a more rigid and explicit set of rules in this video and this video. There are also two blog posts on the topic of “What is Unsupported?” Part 1 and Part 2.

Here is the simplified map showing all start, control point, and finish locations used in each edition of the race (up to TCR no8). Press the broken square icon in the top right to see an enlarged wersion and zooming will reveal the obligatory parcours sections associated with the control points.

See the page about each edition of the race for a map showing only the relevant points and the simplified route for that edition.

16 different countries have hosted a start, checkpoint or finish location: Belgium, Bosnia, Bulgaria, Czechia, Croatia, France, Germany, Greece, Italy, Montenegro, Romania, Serbia, Slovakia, Switzerland, Turkey, and UK. The race has typically started in north-western Europe and finished in south-eastern Europe, with the one exception being 2019 when the direction was reversed. 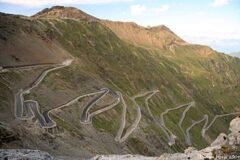