The bike and equipment cause far less air resistance than the cyclist, clothing, and body position, but the amount is still significant. The frame and wheels are the main aspects to consider, but when bikepacking, the placement of bags and other equipment is also important. 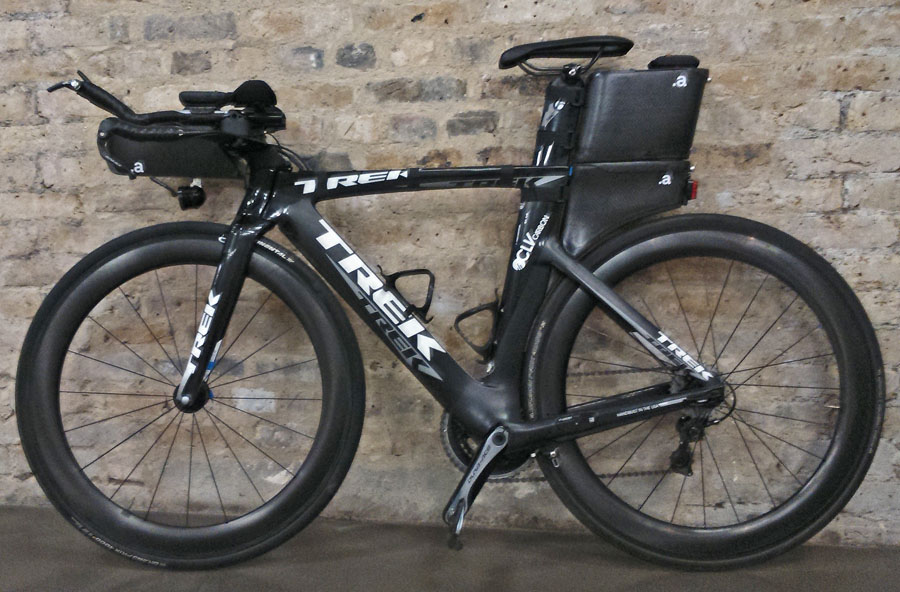 The method used here was the same as that described on the previous page on Air Resistance of the Cyclist. The main results are shown in this table, in which “Diff’ in CdA” means the difference in CdA compared to the default option. A CdA difference of .01 on the 2016 Transcontinental Race (TCR) route translates into an average speed difference of about 0.13 km/h for the same power, or about 1 hour 5 minutes of total cycling time.

The front wheel is the most important part of the bike’s aerodynamics because it hits the clean air first. The standard option used in the model is to have a semi-aero’ rim that is about 30mm deep and aero/bladed spokes, but because most bikepackers use a custom-built front wheel with a dynamo hub, many of them use a traditional ‘box-section’ shallow rim and round spokes, which will increase the total CdA by about 0.01, or costing about one hour of cycling time in the 2016 TCR (and so a predicted finishing time that is 2 hours later).

My preferred semi-aero’ rim that has an aluminum braking surface, has been designed and tested in the wind tunnel, and that is available as a separate rim and in any spoke drilling is the Flo 30. In fact, I don’t know of any other rims that have all of these characteristics.

Using a deeper, fully aero’ front rim may reduce the CdA by up to 0.01 compared to a semi-aero’ 30mm rim and save a further hour of cycling time, but such rims are normally carbon, which is fine if the bike has disc brakes, but I prefer to have reliable and predictable braking and to not need to worry about my rims overheating and so I personally won’t use a full-carbon rim with rim brakes (this video explains why). In addition, some deep front rims can cause handling problems in windy conditions (although this is less of a problem with more recent designs).

In terms of aerodynamics, the rear wheel is about half as important as the front wheel. The default used in the model is again a semi-aero’ 30 mm deep rim with bladed spokes, but if a traditional box-section, shallow rim and round spokes are used then this will increase the bike’s CdA, but this time by only about 0.005. A deeper, fully aero’ rear rim may reduce the CdA by 0.005, but on the rear of the bike, a solid ‘disc’ wheel could even be used and may reduce the CdA by 0.01 compared to the semi-aero’ rim, and so save about 1 hour of cycling time in the 2016 TCR. Solid disc wheels are not allowed in UCI mass-start races, and many people believe that they handle badly in crosswinds, but that is not really the case for rear wheels because they do not cause any steering effects.

The page about Wheels contains further information on this topic, including information about how to get a custom wheelset built if you want to choose the rim, hub, and spoke count separately instead of using a more restrictive stock option.

The width of the front tire has a significant effect on the front rim’s aerodynamics. To avoid losing most of the aerodynamic benefits of a well-designed rim, most experts recommending using a tire that is no wider than the rim. Many modern rims are reasonably wide at 24-26 mm externally, including the Flo 30. These are therefore optimized for a 23-25 mm wide tire.

It is not the width stated by the tire manufacturer that matters, only the width when mounted on the rim matters. On wide rims, many tires are up to 2 mm wider than is stated. Therefore, a tire that optimizes the aerodynamics of a 25 mm wide rim is likely to be one that is labeled as a 23 mm model, but which measures closer to 25 mm on a wide rim. More traditional rims are 17 to 22 mm wide externally. Even if they have a semi-aero’, deeper profile than a standard box-section rim, they are unlikely to be very aerodynamic once a 23+ mm wide tire is mounted on them, and none of them have been designed with the help of a wind tunnel.

Unfortunately, I don’t know of any data assessing the aerodynamic impact of using Fenders/Mudguards.

Frames with moderately aero’-shaped tubing have been shown to perform slightly better in the wind tunnel when compared to standard road frames, with measured differences in CdA of about 0.01, but such differences may be greatly diminished when bags and accessories are added to the frame to do a self-supported race.

Frames with many integrated parts that are designed purely for aerodynamics (e.g., the Specialized Venge ViAS) may have CdA values as much as 0.02 lower than a standard frame, but if a high level of component integration causes compromises with equipment choices, comfort, or on-the-road serviceability then such frames may not be a good idea to use in a self-supported race. In addition, the cost per given amount of speed gain is far higher for a new, more aerodynamic frame than is the cost for new rims, clothing, or other equipment that could result in similar improvements.

In terms of the components on the bike, the only option that has a real effect on aerodynamics is the type of brakes. Research suggests that there is a minimal to small difference between disc brakes and rim brakes (see here, here, and here), so disc brakes may cost 0 to 1 hours of cycling time compared to rim brakes over the whole TCR course due to air resistance. The extra weight of disc brakes versus rim brakes (500 to 800 grams depending on the bike and components) will cause the disc brake bike to be a further 15-30 minutes slower. The practical advantages and disadvantages of disc brakes and rim brakes are far more important that these small time differences, which are covered on the Brakes page.

Luggage placement is even more important in bikepacking races than the aerodynamics of the bike’s wheels and frame. Specialized showed in the video below that using a side pannier bag is a far less aerodynamic way to carry a 6-pack of beer than is putting it in a backpack or on top of the rear rack. They also showed that storing all food in a frame bag instead of taping it to the top tube (as many triathletes do) can save significant time.

Cycling About compared the difference in speed for a constant power when using side pannier bags compared to bikepacking bags. Maintaining 200 watts of power while riding around a velodrome yielded about 30 kph with the bikepacking bags and only 28 kph with side panniers (it made no difference whether the panniers were on a front or rear rack). It’s not the most scientific test, but it suggests that the difference in CdA between the two setups is about 0.07 – 0.10, which is massive and would translate into a speed difference of 1 to 1.5 kph at the power output assumed for the average TCR rider, and so up to 10 hours of cycling time.

GCN also tried to tackle this question in the following video:

Unfortunately, the GCN test wasn’t the most scientific and the numbers presented were not particularly precise, but they suggest a more moderate change of about 0.025 in CdA between the setup with side panniers versus bikepacking bags, which would mean about 0.3 kph difference for an average TCR rider, or 2.5 hours of cycling time. This is a topic that needs more scientific and precise testing, but we can already say that the effect is quite large.

Partial frame bags are popular with bikepackers, but it would be interesting to know whether using a bag that completely fills the frame’s front triangle would be more aerodynamic than leaving that space empty or only partially filled. A few bikepackers use custom-made carbon fiber storage areas that are integrated with the bike, and some triathlon bikes are starting to appear with integrated storage compartments that will hopefully soon make it onto regular road bikes.

For a general discussion of this topic, see Dave McCraw’s article on Wind resistance and cycling speed. The AeroGeeks website also contains many interesting articles.

This page is in the Determinants of Speed section. Having covered the three main resisting factors of cycling speed (weight, rolling resistance, and air resistance), the next page covers Mechanical Resistance: Drivetrain Efficiency & Hub Bearings.