Several factors influence a bicycle’s performance and cycling speed in addition to weight: changes in rolling resistance, air resistance of the cyclist and bike, and drivetrain efficiency can all have a larger effect on a cyclist’s speed than a moderate change in the bike’s weight. 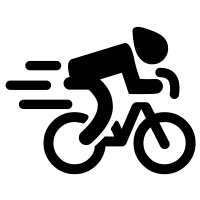 The degree of progress or success in self-supported, ultra-distance bikepacking races in which the clock never stops is most easily measured by the distance ridden each day. The same distance can covered by different riders in many different ways, so it is informative to breakdown each day’s performance into three separate measures:

Average cycling speed is not only determined by the equipment that is used, but also depends on the rider’s level of Physical Fitness and their degree of Comfort on the Bike, each of which is covered in separate sections of this website. In this section, those aspects are assumed to be equal and the focus is purely on cycling speed.

When trying to increase average cycling speed by choosing optimal equipment, people put an excessive focus on weight. This is mainly due to the other important factors being difficult to measure and information about them not being widely available. In addition, the overall importance of each factor is difficult to understand because the data that is available is reported using a wide range of incomparable metrics (watts of power, watts of drag, efficiency percentage, etc.). Lastly, in many types of bike racing, weight can be reasonably important, but ultra-distance cycling is quite different to most other types of bike races, so the same conclusions do not apply (see The Actual Effect of Weight on Cycling Speed page for further discussion of this point, and there is a good article ar road.cc that reaches a similar conclusion – that weight is vastly over-rated).

The only way to understand the relative importance of each type of resistance on cycling speed and to determine what effect certain changes will have is to incorporate all known factors into one single model of cycling speed. Instead of computing speed in one specific instance/situation (which can be done using several online tools; e.g., The Computational Cyclist), I implemented a model that could be used to investigate how the average speed across an entire route is affected by each aspect of a bicycle’s performance. Bike Calculator (simple and free) and Best Bike Split (complex and requires a paid subscription) are the most similar online tools.

I simulated a typical cyclist in an ultra-distance cycling race, the Transcontinental Race (TCR), by using a power profile that predicts average speeds comparable to those that have been observed for people who finished previous editions of the race in the middle of the rankings. This typical power profile was combined with the route of the 2016 TCR (about 3,900 km and 55,000 meters of climbing according to Strava). Despite the focus on this specific race, the overall findings are useful for understanding what factors determine cycling speeds in general.

Below are the extremely simplified highlights of the results. I strongly encourage interested readers to click on the links on the left to read the more complete reports that describe how the results were obtained and to read many more results that are not included in these simplified summaries.

There is an important distinction between cycling times and finishing times. Data from the satellite trackers that riders carry suggests that typical TCR racers spend about half of the elapsed time actually moving/cycling (i.e., about 12 hours per day). Therefore, any times that are reported as “Possible savings” in cycling times should be doubled to obtain the expected difference in the more important metric of finishing times. However, where appropriate, certain results are already given in terms of finishing times.

The total savings listed in the table above and summarized in the graph suggest that the difference between using certain equipment and others could total over 26 hours of cycling time for a typical TCR rider, thereby changing the predicted finishing time by well over 2 days! This is even when keeping the weight the same and not considering any changes to riding position. The standard model already includes most of these savings as the default options, so the predicted finishing time of the average-strength rider of 180.5 hours cannot be reduced by that much; instead, it is more likely to be increased if non-optimal setups/equipment is used. 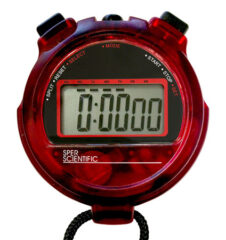 Method, Finish Times & Effects of Increasing Power on Cycling Speed
The effect of increasing cycling power on average speed was investigated and finish times predicted for a longer vs a more mountainous course. Read More ...