Because of the current proliferation of bikepacking races, individual events are becoming less important, so I’m removing some pages about specific races. So that this content is not lost, I’ve turned it into blog posts.

Below is the summary that I made of the 2017 edition of the Indian Pacific Wheel Race. 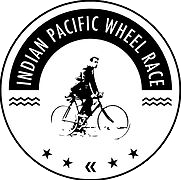 The Indian Pacific Wheel Race (IPWR or Indy-Pac, official website and Facebook group) is a self-supported, ultra-distance bikepacking race across Australia. The fixed route is about 5,500 km long and goes from the shore of the Indian Ocean near Perth to the Pacific Ocean in Sydney. The clock never stops and riders must find all of their supplies at commercial sources along the route.

During the first half of the race, the Nullarbor Plain must be crossed, which is an arid area without settlements and has minimal services for over 1000 km; for a short section there are not even any trees, which is the origin of the name. During the second half of the race, several major cities must be ridden through plus several sections of hills and the Australian Alps.

The race is partly a homage to the Overlanders who crossed large, uncharted parts of Australia by bicycle in the late 19th and early 20th centuries. There was also intense competition to see who could ride between certain cities in the shortest time possible, with attempts receiving a lot of public and media attention. See also the page on the History of Bikepacking Races. 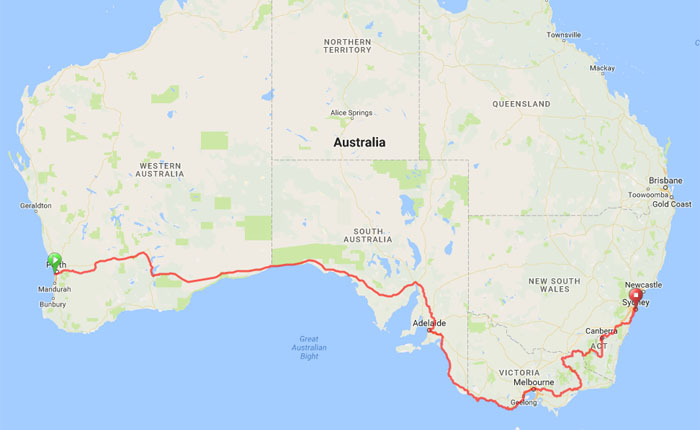 Other well-known riders doing the race included Cycling Maven (Mark Ferguson) and Durian Rider (Harley Johnstone) who each have popular YouTube channels, and Rupert Guinness, an Australian cycling journalist. Nathan Jones was also there, who organizes the Trans Am Bike Race and was doing the Indy-Pac as part of an around-the-world tour. There were also many other veterans of bikepacking races around the world.

Unfortunately, Jesse Carlsson had to retire from the race the next day with an injury and Steffen fell back to around 10th position after a few more days. Sarah Hammond, who had finished sixth in the Trans Am and won the Race to the Rock, moved through the chasing pack to establish herself in 3rd place. Juliana Buhring was expected to be another strong contender because she had finished in the top 10 of the Transcontinental Race and Trans Am, but she had an allergic reaction to some painkillers on the 2nd and 3rd days and had to return to the start for hospital treatment. She then chose to start the race again, 8 days after the initial start.

When going into the Australian Alps section on the 11th day, Kristof still held a comfortable lead over Mike, but stopped for a long sleep partway up the first major Alpine climb, the ‘Back of Falls’. Mike was close behind by the time Kristof got back on the road on the 12th day and then passed him when Kristof stopped for food. They spent the rest of the day reasonably close, including a couple of hours when they were less than 200 metres apart and trying to match each other’s injections of pace. At the end of the day, Mike Hall finally started to drop back and stopped to sleep. Kristof’s lead extended the next day, and was over 150 km ahead by the start of the 14th day with only about 300 km left to the finish line.

Tragically, while riding towards Canberra on the 14th day, Mike Hall was hit by a car and died. The race organizers decided to cancel the rest of the race. See my blog post: A tribute to Mike Hall: Legend & leader.

After being informed of the incident, Allegaert chose to honor the memory of his comrade by riding almost to the finish line at the Sydney Opera House, stopping within sight of it but never actually reaching it. Other riders also chose to continue along the route, but many riders stopped and took transport back home or took other routes. Two days after Mike Hall’s death, memorial rides were held in all of the cities that the race had passed, which were attended by many hundreds of cyclists including some of the racers.

The race attracted a lot of attention in the general Australian media and many people along the route became aware of it. Riders reported having people cheer them from the side of the road even in very small towns, and many people cycled behind each of the leaders as they rode through the major cities.

Official race reports can be found on the Race Blog and many videos and updates were posted on the official Facebook page. I was interviewed for The Bike Show podcast talking about the race along with Craig Fry, an Australian cycling journalist.

Indian Pacific Wheel Ride 2018 and after

It was announced before the race started in 2017 that there may only be one edition. After the 2017 edition was cancelled in tragic circumstances, whether there would be any future editions was even more uncertain. In late 2017 it was announced that the race would be held again in 2018. However, one month before the start, the organizers were forced to cancel the race as a result of the ongoing inquest into Mike Hall’s death.

Many riders decided that this decision wouldn’t stop them from riding across the country on their planned route and starting the ride at the planned time and the event was renamed by changing the word “Race” to “Ride”. A similar informal edition was held in 2019.