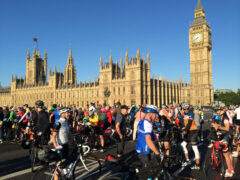 The map at the bottom of this page shows the simplified routes. The start was again in London on Westminster Bridge, on 9th August, 2014, at 8:00am.

The first checkpoint was in southern Paris and any ferry across the English Channel was allowed, so people left London in three directions: a few headed for Portsmouth, some for Newhaven, but most for Dover. Those taking the Dover-Calais ferry arrived in France earliest, but had the farthest distance to ride. The people in Newhaven had to wait a long time for the overnight ferry but had the shortest distance to ride.

The checkpoint in Paris was at the café Le Réveil-Matin in the suburb of Montgeron, which is where the first ever Tour de France started in 1903. The leaders passed through in the middle of the first night. The majority of the people coming from Calais then battled a stiff headwind all morning coming towards Paris while those coming from the west had a slightly easier time with the weather. The remnants of Hurricane Bertha caught up with many riders that afternoon, causing wild winds and heavy rainstorms.

To get to the second checkpoint, which was again at the top of the mighty Stelvio Pass in Italy, almost everyone headed for the flatter lands between the Jura and Vosges mountains, which brought them through Basel, Switzerland. One rider went much further south, through Dijon and around Lake Geneva. Anyone who followed the first edition of the race was not surprised that the name of the rider who seemed to be off course was Mikko Mäkipää. Mikko had won the Spirit of the Race award in 2013 for taking a far more interesting route than anyone else and still reaching Istanbul in a very respectable time. This year, Mikko rode down to Lake Como in Italy, but just missed the last ferry crossing of the day that would have allowed him to visit the Madonna del Ghisallo church, which is dedicated to the patron saint of cyclists.

Most other people took a route through northern and eastern Switzerland to the Stelvio Pass, although a few people went via Austria. Similar to the previous year, the leaders climbed the high pass in the dry, but the majority of riders faced several hours of rain in the mountains and temperatures that went below 0 degrees C on the Stelvio overnight, and not much above that during the day. Just like the previous year, one rider didn’t realize that he needed to climb the pass from the east, and when he was informed of this at the summit, he chose to do the climb a second time from the correct side to get the control stamp.

To get to the third checkpoint at Mt Lovćen above Kotor Bay in Montenegro on the Adriatic coast, the field split into two very different trajectories. One group stayed on land and rode through Slovenia and Croatia on or near the Adriatic Sea, while the other group went down the Italian coast to take an overnight ferry from Ancona to Split. All of the lead riders took the land-based route, but in the end those taking the ferry across the Adriatic tended to be faster than those who went overland.

The previous year’s winner, Kristof Allegaert, had built up quite a lead, but took a forbidden ferry that was a shortcut across the mouth of Kotor Bay instead of taking the road around it. He was fortunate that this was not far from Mount Lovćen, so when he was informed of his mistake at the checkpoint, he was able to descend, rectify his error, and re-do the climb. This lost him about 5 hours total but he was still in the lead.

After Mt Lovćen, riders went towards the finish in Istanbul either via Serbia or Macedonia to Bulgaria, or via Albania and along the Greek Aegean coast. The previous year, most people had approached the finish on the Bosphorous river by going through the center of Istanbul, which was congested and deemed too dangerous by the organizers. Therefore, for the second edition, riders were required to arrive via a quieter route through the Belgrad Forest in the northern suburbs of the city. Mikko again did his own thing, going around the southern side of the Sea of Marmara to reach Istanbul from the Asian side. The typical total distance ridden was 3500 to 3700 km.

101 starting places (100 challengers plus the defending champion) were available, which were awarded on a first-come-first-served basis in less than 7 days after registration opened in November, 2013. A waiting list was used for those who signed up afterwards and starting places were re-assigned as people dropped out. 87 people made it to the start line.

64 of the 87 starters finished the race, 48 of whom made it before the party at the end of the 15th day. Kristof Allegaert (Belgium) was again the winner by more than 24 hours, finishing in 7 days and 23 hours, and even beating the official race vehicle to the finish line. Josh Ibbett (UK) came second and Richard Dunnett (UK) dropped one place from the previous year and finished third. Pippa Handley (UK) was the first of six female finishers, and was 16th overall at just over 12 days.

The official results are here. I have done some further analyses of the results that includes the times recorded at the three checkpoints and rankings between each.

Charge bikes also made some videos: here and here.

Matthias Wjst was the official race photographer, see his images.

Race reports from individual riders are listed near the middle of this page and my own race report is here. 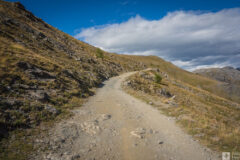