As in the previous year, the race started in Geraardsbergen, Belgium with a short loop around the town and then an ascent of the cobbled climb, the Muur van Geraardsbergen, but that was the only location used in 2016 that had been used in a previous edition. The start time was two hours earlier than before at 10pm on 29th July, 2016. 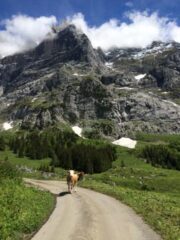 The leaders managed to ride about 650 km to the first checkpoint in Clermont-Ferrand in central France in just over 24 hours. After visiting the checkpoint, riders ascended the Col de Ceyssat on the side of the Puy de Dôme, an extinct volcano. The col was used because the race had unfortunately not received permission for people to ride to the top of the volcano on the private service road.

The second checkpoint was in the central Swiss Alps. Most people took the easier route to get there that crossed the Jura mountains near Pontarlier and descended down to Lake Neuchatel. Some people chose to go further south and along Lake Geneva. The Swiss checkpoint included the longest obligatory parcours ever used in the TCR, a total of 70 km with over 3500 meters of climbing going over the Grosse Scheidegg, Grimsel and Furka passes (the latter being at 2429 m elevation).

The third checkpoint was at the Passo Giau in the Italian Dolomites. The shortest route to get there required going over 3 more Swiss mountain passes, each above 2000 meters elevation. Some people chose the much longer, but somewhat flatter route through the Swiss region of Ticino and then along the base of the Italian Alps. 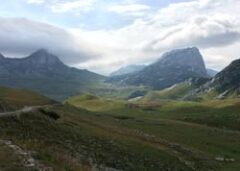 The fourth checkpoint was at a new location in Montenegro, the Durmitor National Park. There was again a variety of route choices, with most people descending down to the Italian lowlands and going via Trieste and then onto the Croatia coast, but some people went north into Austria, then through Ljubljana in Slovenia and onto Sarajevo in Bosnia. Many who rode along the coast in Croatia experienced extremely strong Bora winds that made it difficult to ride at times.

This was the first edition of the race that did not finish in Istanbul, Turkey. The finish was still in Turkey, but this time it was on the Asian side of the Dardanelles channel in the town Çanakkale, which is near the site of the ancient city of Troy. Most people took a similar route between Checkpoint 4 and the finish, going via Kosovo, Macedonia, and Greece, but a few opted to stay further north through Serbia and Bulgaria.

For the first time in the race’s history, the typical total distance ridden was shorter than it had been the previous year, at 3700 to 4000 km, but it involved significantly more climbing, with at least 40,0000 meters climbed (compared to around 30,000 meters in other editions). Here is the simplified map:

The organizers posted far more updates during the race than in previous years, see the following posts:

PEdAL ED, one of the event sponsors, made a video about the race:

And here is another professionally-made video that mostly followed one rider, Jacopo Porreca, but also includes many others:

Netwerk Geraardsbergen made a video about the start, there a few videos on the race’s official Vimeo channel and the Bike Show did a podcast after the race including interviews with Mike Hall and Emily Chappell.

A French magazine, 200 has several articles about the race in the Autumn 2016 edition, including interviews with Kristof Allegaert, the first mixed pair to finish the race (Charlotte Dequevauviller & Thomas Chavrier). The editor (Alain Puiseux) wrote an article about riding the race himself; it’s all in French, but it’s one of the most beautiful reports that I’ve ever read.

The number of starting places again increased, this time from 250 in 2015 to 300 in 2016, consisting of 200 solos and 50 pairs. 600 people completed the application in November 2015, and this blog post explains how volunteers, race veterans, and people who would increase the diversity of the field were given priority before a random lottery was used to assign the remaining places, with the outcome of this process being announced in late December. In the end, 216 people made it to the start line.

Provisional race results were posted on the TCR website in early December 2016, and a revised version of these is available here, which is what the analyses below are based on. An “official” version of the results was not published before the race director Mike Hall passed away in March 2017, so these “provisional” results are the final version that was published.

I’ve delved deeper into the data by looking at the times taken between the checkpoints and the tracker data to understand the story and progression of each person’s race. I make comments summarizing this for all racers who finished before the party at the end of Day 15 plus several other notable racers.

Times between the checkpoints are obviously affected by when each person took sleep breaks, etc. and the weather and route conditions that each person experienced, but it is still interesting to see where people gained places or lost places during the race. To view specific rider tracks, go to Trackleaders and click on an individual rider’s name or click on the T  button at the top of the map to show all tracks.

My comments about each rider’s race are based purely on the publicly available data and are kept as neutral as possible. Every racer has a far richer story to tell, and fortunately many of them have shared that by writing race reports, blogs, podcasts, videos, etc. I have given links to as many of these as I can find – click on the riders’ names that are in green to view their reports. If you know of a race report that I haven’t linked to then please Contact Me. I’ve given preference to post-race summaries over Facebook and Twitter posts, but have included the latter when nothing else was available. The reports are mostly in English, but there are a variety of other languages.

There are five tables below, organized based on the classification of the racers. The positions and times at the finish include all penalties. Times taken between the intermediate checkpoints do not include the penalties. You can click on a link to skip directly to a certain table.

84 of the finishers were classified as “Solos”: “riders who started and finished as individuals without receiving outside assistance”. In the results table below, intermediate rankings are shown in the “Rank at CP …” column, but to make relative progress through the field much easier to track, this data only includes the 84 solos. Pairs, people who finished but were unclassified, and people who passed the checkpoint but did not finish are not included in these rankings.

In the “Comments” column, “overall” positions and positions in each intermediate segment between checkpoints are calculated based on all people who passed those checkpoints (meaning 205 people for Start-CP1, 183 for CP1-CP2, 158 for CP2-CP3, 141 for CP3-CP4, and 138 people for CP4-Finish). In contrast to the official results, pairs are counted as taking two positions in the overall rankings instead of one.

Intermediate positions are given out of all pairs that finished and were classified.

Despite crossing the finish line in a certain position, these racers are unclassified due to starting in a pair and finishing as a solo, starting as a solo but riding a significant portion of the race with another racer, or due to receiving outside assistance. Comments are made for everyone who finished before the party. Intermediate positions for these riders are given out of all 216 starters and they are listed alphabetically.

Scratched / Did Not Finish

Intermediate positions are given out of all 216 starters. “x” = Checkpoint where the racer was first registered as having scratched. Comments are made for people who were in the top 10 at some point and for people who publicly reported their reason for scratching. Riders are ordered based on the number of checkpoints reached, then by the poistion at the last checkpoint, then alphabetically.

And finally, a report from a checkpoint volunteer, George Bennett. 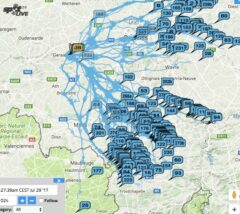