Find out more about me or get in touch below. 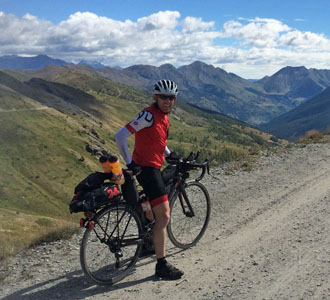 My name is Chris White. I was born in England but left after I finished school and lived in the USA and Canada for about 5 years each before coming to Switzerland more than 12 years ago.

I’ve been riding bikes seriously for about 20 years. The first time that I decided to Ride Far was only one week after buying my first adult bike: a failed attempt to ride from Chicago to New Orleans in the USA; I had a lot to learn. Since then, I’ve done several independent bike tours almost every year and have worked as a bike tour guide and planner.

I first heard about the Transcontinental Race in 2012 and was an avid dot watcher for the first edition in 2013 online and was immediately obsessed with it, so signed up for the next year. I’m now one of only 7 people to have competed in three of the first four editions of the Transcontinental Race. My best result was in 2016, when I was the 25th solo finisher, having ridden 3800 km, much of it in mountainous terrain, at an average of 300 km per day and a finishing time of 12 days 20 hours. There is a section of this website devoted to my Ride Reports.

Before discovering the Transcontinental Race, I was riding cyclosportive events in the Alpine regions around where I live in Switzerland. The longest such event was the 270km-long Alpenbrevet in the central Swiss Alps that includes over 7,000 meters of climbing, which I did in 2010.

I had to scratch halfway through my second Transcontinental Race in 2015 due to a back problem that flared up a few weeks before the start and got really serious during the race (to be honest, I shouldn’t have started, read my Race Report). I then heard of many other people’s stories about scratching, some of whom stopped due to problems or injuries that I felt could have been avoided if they had started better prepared (almost 50% of the starters scratched that year).

I therefore started to build this website in September 2015. The fist pages were about how to prevent over-use injuries from long-distance cycling (which is now the core content in the Rider Comfort section) and I’ve slowly expanded it from that to currently include over 70 pages on every topic related to bikepacking and ultra-distance cycling. I did a major overhaul of the content, organization and appearance of the site at the end of 2016 and created the Ride Far domain. Towards the end of 2017, I added the Rider Safety section and optimized the site navigation to make it easier and more visually-appealing.

My writing style is to include a lot of detail, sometimes too much, but many people seem to appreciate it (some of the praise that I’ve received is included on the Support This Site page), so I see no need to simplify things. I try to present all valid alternative points of view, but at the same time I highlight that which I believe to be the best. I’ve always appreciated factual websites like the great Sheldon Brown’s and Peter White’s; if this site is anywhere near as useful to other people as their sites have been to me then I will be satisfied.

If you’ve found this site useful and you’d like to support it then the Support This Site page includes information on all possible methods, or use one of the PayPal Donate buttons below. Thank you.

Get or Stay In Touch

Use this form to leave some feedback or ask me a specific question.

To know more about the riding that I do, you can follow me on

This page is in the Site Info part of Ride Far.