Bikepackers and ultra-distance cyclists use many devices that they need to keep charged, including lights, navigation devices and phones. Options for charging USB-powered devices when cycling long distances are presented, including dynamo-powered, battery-powered and mains-socket powered USB chargers. 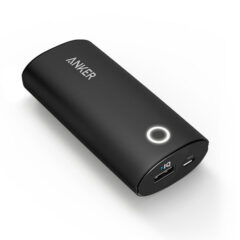 Dynamo power can be converted into USB power using various devices. Whereas the Busch & Müller Luxos U front light (described on the Headlights page) has an integrated USB output, all other options are separate devices. The Plug by Supernova is quite popular but it doesn’t work in many carbon forks because you need to have a hole in the bottom of the steering column to pass the cable through and the special expansion plug is too large to work with some forks without modification; in addition, many people have had these fail during use. Other options include the SineWave Revolution, B&M USB-Werk, BioLogic ReeCharge, and PedalPower+; see here for even more options.

Using a dynamo-powered USB charger may not be ideal because there are many high-capacity reserve battery packs now available that are a lot cheaper than dynamo-powered chargers. Since I’ve had an Anker Astro (Amazon), I’ve stopped using my dynamo hub for charging and only used this battery to avoid having extra drag on the front hub, which decreases average speeds by about 0.3 kph when in use (see the Mechanical Resistance). These chargers can be useful even for people who prefer to use a dynamo-powered charger most of the time because dynamo-powered chargers don’t work well at night when powering the lights and it’s always good to have a backup charger in case of a dynamo system failure.

When staying at a hotel, you’ll want to recharge all of your gadgets and lights from a wall-socket USB charger. People who save space by bringing a small, single-output USB charger often report having to wake up during the night to switch between charging different devices. I therefore recommend bringing a wall charger with at least 2, preferably 4 outputs, a good option being the Anker PowerPort, which is available with various plugs depending on the country: US plug (Amazon US), UK & EU plugs (Amazon UK) or EU only (Amazon DE). See Wikipedia for information about socket styles used around the world.

Ideally, many of your devices will use the same charging cable, but you should have a sufficient number of cables so that you can charge the maximum number of devices at the same time based on how many outlets your chargers have. Devices are often delivered with medium-length cables, but to save space you can easily get some shorter, 30 cm long cables. In addition, small adapters are available to convert one type of cable to another, for instance taking a micro-USB to Lightning adapter is much smaller than taking a specific Lightning cable.

As mentioned on the Navigation Devices page, the Garmin Edge 1000 and Explore 1000 models have the cable port in an awkward position underneath the device, which often causes problems. Bikepacking veteran Chris Bennett offered a solution for this that involves using a charging cable with a 90 degree bend in the head and a rubber strap to hold it in place, but you need to make sure that the cable you buy has the plug oriented in the correct direction so that the cable points away from the device. If you have an Edge 1000 and you aren’t already bringing a second similar cable for another device then bring an extra cable because I know of many cables that have been damaged due to the charging location on that device.

If you need to use standard AA or AAA batteries, then although they are significantly more expensive, Lithium batteries last a lot longer than regular batteries and so fewer spares need to be carried and less time is spent changing them. The Spot trackers that are used to monitor racers’ positions during most bikepacking races only work properly with lithium batteries. For a useful comparison between the amount of power given by different brands and models of batteries, see the Battery Showdown website.

Navigation Devices for Bikepackers & Ultra-Distance Cyclists
Using a navigation device that has the desired functions and is reliable can save a lot of time in bikepacking races and when doing long-distance cycling. Read More ...