Everyone’s favorite method of making them cycle faster is to remove weight from their bike or equipment. However, adding a significant amount of extra weight actually makes a very small difference to overall cycling speed. 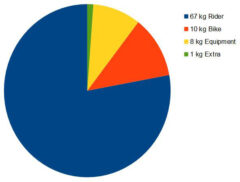 In the standard simulated scenario (see the General Method page), a total weight of 85 kg is assumed. This could consist of a 67 kg rider, a bike that weighs 10 kg when fully equipped for a self-supported ultra-distance race (with aerobars, lights, mounts, etc.), and 8 kg worth of equipment (including food and drink). Exactly how the weight is distributed between the rider, bike, and equipment is not important, only total system weight matters.

If someone tried hard to minimize the weight of their bike and equipment then they could possibly save a maximum of 5 kg and so have a total weight of 80 kg instead of 85 kg, a 5.9% decrease. In reality, a 2 kg weight saving, 2.4%, is probably more achievable, but I focus on the results of the more extreme case. If the weight was lost from the rider’s body instead of the bike then the predictions would remain the same. So, what effect would a 5 kg reduction in total weight have on a rider’s speed?

For the average-strength rider on the 2016 Transcontinental (TCR) route, decreasing the total weight by 5 kg would make the average speed increase by just 0.41 km/h and the total cycling time would be reduced by 3 hours 23 minutes (so the finshing time could be about 6.5 hours earlier). Despite the reasonably large 5.9% reduction in total weight, only a relatively minor 1.9% increase in average speed is predicted, even on this relatively mountainous route.

Some people may be surprised that the difference is not greater, so the table below breaks down where the differences lie. On the steeper uphill sections (>4% gradient), the speed increases by almost as much as the weight decreases (5 to 6%). However, such gradients are only experienced on about one eighth of the route (489 km out of 3899 km = 12.5%). On flat sections, the reduction in weight causes a very marginal increase in speed (0.1 km/h); this is not directly due to gravitational forces, but instead because rolling resistance decreases linearly with weight. On downhill sections, speeds are actually reduced when the weight is lower because the assisting gravitational force is weaker. Readers wishing to verify these results can use this website and set the parameter values as suggested on the General Method page, or any other values could be tested.

It could be argued that on flat sections, extra weight may cause speeds to decrease due to acceleration being slower. This is true, but the differences are very small and ultracyclng involves very little stopping or even slowing down and almost no sprinting (except maybe during an occasional dog chase), so this effect is not worth considering.

The finding that a 5 kg reduction in total weight results in a 0.4 km/h improvement in average speed on the 2016 TCR route can actually be generalized to quite a broad spectrum of total weights from 70 kg to 110 kg and for both the average-strength and strong riders. The effect of weight is practically linear in this region, with every kilogram saved or gained resulting in a difference to the overall average speed of about 0.08 km/h. This translates to about 30 to 40 minutes of cycling time saved across the entire 3900 km route per kilogram saved. This can also be though of as about 1 minute per 100 km per kilogram saved, or 2.5 to 3 minutes per day!

For the flatter 2015 route, the predicted speed difference for a weight reduction of 1 kg is even smaller at just 0.06 km/h, or closer to 2 minutes per day. Even if only the 700km-long Alpine section of the 2016 route is considered (from Interlaken, Switzerland, to the Slovenian border), this value is still only 0.1 km/h of speed gained per kilogram lost.

This analysis suggests that it is rational to carry any piece of equipment or supplies that weighs less than 1 kilogram and can save at least 3 minutes per day of time spent off the bike (assuming that the extra equipment has a minimal aerodynamic disadvantage). I use this finding throughout this website when giving advice about equipment choices.

In professional cycling stage races, the weight of the bike and the rider is very important. I am essentially arguing the opposite of this for ultracycling races. Why is there such a difference?

The important difference is that the overall standings in professional stage races are normally decided by attacks happening during the steepest parts of climbs at the conclusion of stages that end with an uphill finish. As shown above, a given percentage of weight saving translates into a similar percentage of speed increase on steeper climbs, and so the focus on weight makes sense in many professional road bike races, where even a 1% difference in performance at the critical moments can give a significant advantage.

Many amateur riders test themselves in one-day cyclosportive rides / gran fondos, or possibly the multi-day equivalents like the Haute Route. Although many of these events record times for the entire route, more and more such events are moving towards only recording times for the climbs (due to safety and liability concerns) and so they are becoming King/Queen of the Mountain (KOM) contests. In addition, many amateurs like to compare themselves to others by looking at the Strava leaderboard on their local climbs. In all of these situations, performance is again mostly determined by climbing speed, so again weight can have a significant effect (although it’s effect is still not as great as most people believe it to be).

In terms of the cycling component, ultracycling races are not like the fight for the general classification on the uphill finishes in a stage race, or the KOM competition in a cyclosportive event, or the virtual standings on Strava, they are essentially extremely long individual time trials. In time trials, even those done during professional stage races on moderately hilly courses, teams choose equipment by focusing on air resistance and rolling resistance. The 2016 TCR route includes more climbing per km than a typical time trial, but as in a time trial, time savings on all parts of the route matter equally in ultracycling, so making decisions purely to maximize climbing speed is generally not the best equipment strategy for this type of race. In addition, minimizing time off the bike is equally as important as is cycling speed on the bike, which requires a whole different set of criteria.

It should also be remembered that when comparing a 7 kg bike to a 9 kg bike, the 29% weight difference between the bikes feels like a lot when lifting them up, so you would expect this to translate into a significant difference in speed when riding them, but when riding the bike up the hill only the total weight matters. The 29% difference in bike weight is then reduced to just a 3% difference in total system weight for a typical cyclist!

For another look at this topic, see Dave McCraw’s article on Bike weight and performance. Cycling About did some real-world testing with different weights, and arrived at a similar figure to my computational analysis: about 1 minute of cycling time saved per 100 km ridden for a 1 kg weight saving. 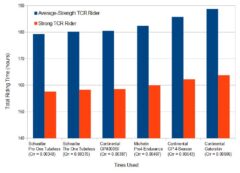