I now have a power meter on each of my two main bikes. My pure race bike (a Specialized Tarmac SL4) has a PowerTap GS rear hub and my all-road / adventure bike (a Specialized Diverge FutureShock) has a Stages left-hand crank (the latest generation since it was recently replaced under warranty). I was therefore interested to see whether the readings of the two are comparable. If the Stages gave an average power of 200 watts then would the PowerTap read the same? 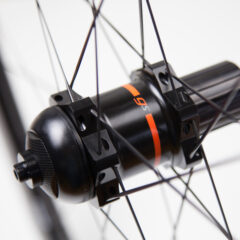 Most power meters claim to be accurate to within +/- 2%. However, the Stages only measures the power given by my left leg and then doubles this value. In mid-2015, while preparing to do my second Transcontinental Race, I had major sciatica problems on my left side, causing intense pain and then a considerable loss of sensation and strength in my left leg due to a pinched nerve where the sciatic nerve exits my spine (which eventually caused me to scratch from the race).

After the sciatica flare-up, cycling was easier than walking but I could tell that my left leg wasn’t working nearly as well as it was beforehand or as well as my right leg and my pedaling motion was quite unbalanced. This was extremely noticeable during the first 3-6 months after the flare-up, but I felt that it was still affecting me until about 18 months afterwards. Early 2017 was therefore the first time that I felt that I was pedaling normally again.

I therefore did this power meter comparison to not only compare the two power meters but also to see if there were any residual effects of my sciatica problems.

I installed the two power meters on my Specialized Tarmac, each connected to a separate Garmin, calibrated them and went for a reasonably intense 3-hour ride that included a 30 minute long climb over my local col and rolling terrain before and after that (see the ride on Strava).

I was amazed during the ride how well the data from two power meters appeared to be tracking each other. When I analyzed the data in detail on my home computer, my initial impression was confirmed – the values were extremely similar to each other. Overall average power was 175.4 for the Stages and 176.8 for the PowerTap, a difference of just 0.8%. When not including zero values (i.e., only using the data from when I was actually pedaling and not coasting), the difference was even smaller, 203.2 and 203.9 watts, respectively, or just 0.4% difference. 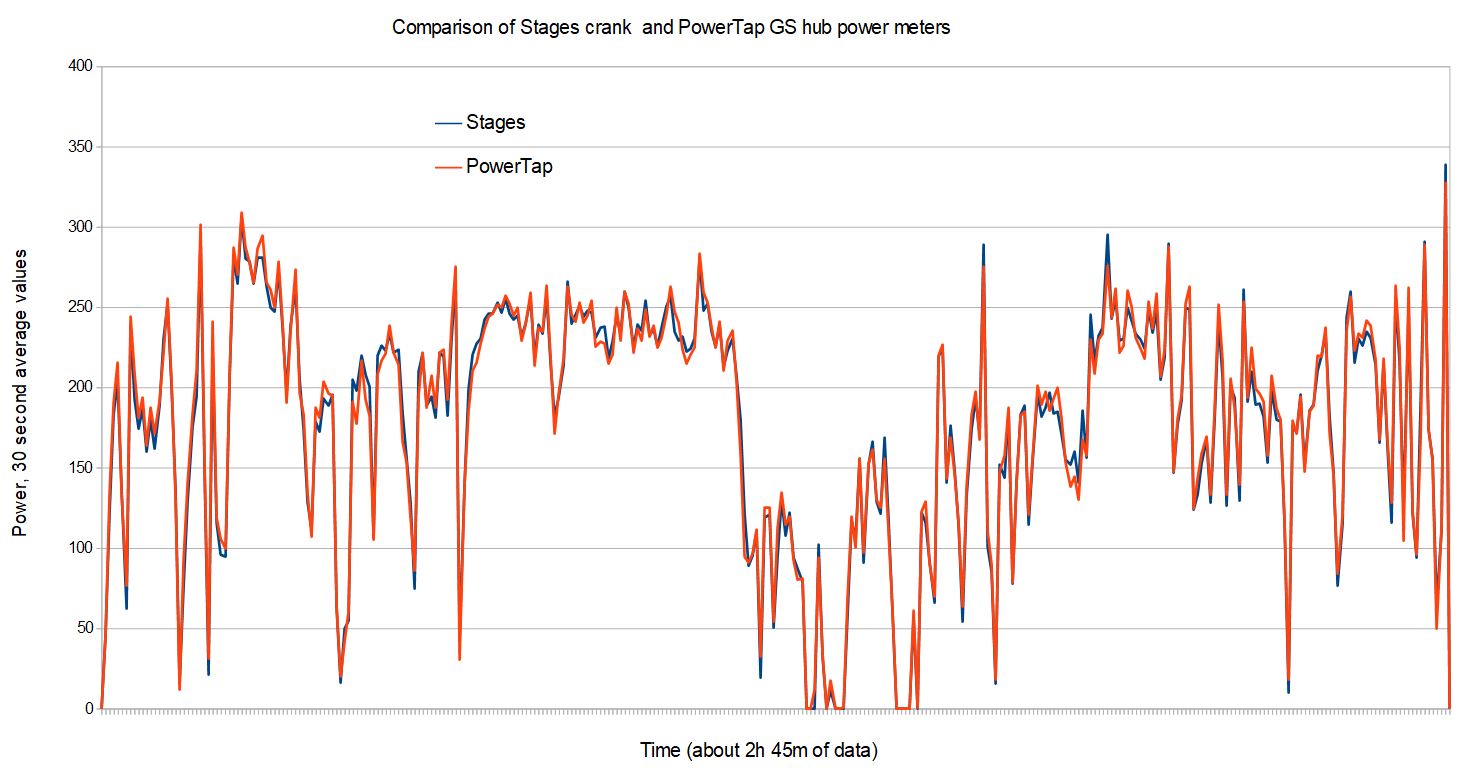 This graph (click to enlarge it) also shows that there were no consistent differences between the data from the two power meters in any part of my typical power range.

Some people claim that a disadvantage of single-sided power meters is that fatigue can cause the balance between left versus right leg power to alter. I was certainly tiring during the final 20 km of my ride, but based on the consistent lack of difference between the two lines in the graph, there is no evidence that the power distribution between my two legs was any different at the end than it was during the first 20 km of the ride. However, I want to test this on some longer rides of 6-12 hours before drawing any definite conclusions.

UPDATE: After comparing data from a couple more rides during which I used some improved settings and looking at the data and patterns in detail, I have found a consistent difference between the two power meters. When starting to pedal after coasting, the Stages crank often takes 1 or 2 seconds more than the PowerTap hub before giving a non-zero power value. It’s not just a general lag in the timing because the Stages also occasionally drops back to zero 1 or 2 seconds before the PowerTap does (but not always).

Overall, the Stages gives a few more zero values than the PowerTap because it appears to have a higher threshold that needs to be passed for it to transmit a non-zero power value. I checked that this wasn’t due to a difference in the Gamin head units, an Edge 800 and an Edge 1030 by switching which computer recorded from which power meter on one ride and saw the same pattern in the data.

When both power meters are recording non-zero values, the data is almost identical (overall differences of 0.1-0.5%, with the PowerTap reading marginally higher than the Stages). Because of the extra zero values the Stages gives while the PowerTap is sometimes recording a small positive value (typically less than 100 watts), when all values are considered, the difference increases slightly (0.5-1.5%, depending on the frequency of coasting episodes).

The important finding is that when power is definitely being applied, there is almost no difference between the average power readings from the two power meters and there are no consistent deviations in any part of my typical power range.

Theoretically, power measured at the crank should be slightly higher than that measured at the hub due to the transmission not being perfectly efficient (the power needs to go from the crank, through the axle, spider, chainring, chain and cassette to the rear hub). Typical estimates for this type of loss at this level of power are around 3% (see the Mechanical Resistance page).

Because the values given by the two power meters differ by less than 0.5%, with the PowerTap showing the slightly higher values, the Stages reading that is using only the left leg power may actually be reading slightly lower than it theoretically should be. There are two possible explanations for this.

First, I have no idea whether each power meter is accurate and calibrated correctly. See this research article that assesses the variation between different power meters from the same manufacturer and from different manufacturers. The manufacturers themselves claim accuracy to be only +/- 2%. Unfortunately, I cannot test this myself.

Second, the Stages may be measuring slightly lower than it theoretically should be because it’s only measuring the power from my left leg rather than both. If this is the case and the two power meters are perfectly accurate then the I appear to have a leg power inbalance of about 48-49% (left) vs 51-52% (right), which is within the normal range and is certainly nothing for me to worry about. To have more confidence in this value, I would need to use a crank or pedal-based power meter that measures and reports the power from each side separately. However, my data suggests that the difference is not large enough to be of any concern.

Regardless of whether the slight deviation from the predicted differences is caused by the two power meters not being perfectly calibrated or due to a very slight imbalance in my leg power, I can still conclude that the two power meters are giving me reasonably consistent data and that my legs appear to be working almost equally effectively. I also now know that I can ride two separate bikes, one equipped with each power meter, and I can compare the power measured on one bike to that measured on the other bike without needing to make any corrections to the data.

During the coming months, I plan to use these power meters coupled with an iBike Newton device that measures real-world wind speed and resistance to test how various bikepacking equipment setups and sustainable riding positions affects cycling speed.