While updating the pages on Ride Far, I’ve realized how often I’ve written the terms bikepacking and bikepacking races as short-hand for the focus of this website: specifically on how to be successful in ultra-distance, self-supported bike races, and more generally how to ride farther while being comfortable and efficient.

I’m very pleased that bikepacking as an activity has grown immensely in popularity in recent years, but at the same time the term has acquired a variety of meanings and connotations, not all of which are appropriate or consistent. I’ve therefore broken down these varied meanings into 4 explicit definitions and made some comments about each of them:

Mixed-terrain bikepacking during the Torino-Nice Rally by evanoui.cc.
Licensed under CC BY-NC-ND 4.0

The most popular current definition of bikepacking is doing multi-day bike rides that involve riding a significant amount of trails and unpaved roads, regardless of what types of bags are being used. Wikipedia adopts this definition: searching for “Bikepacking” automatically re-directs to the Mixed terrain cycle touring page.

Commentary: I believe that this definition should be more specific, with some emphasis placed on being lightweight and riding efficiently being necessary to use the term bikepacking, otherwise bike touring is more appropriate. This is partly because the bikepacking ethos has evolved from the bikepacking races mentioned in Defition #4 below.

Paved-road bikepacking around Mont Blanc by A Swiss With A Pulse.

A slightly different definition of bikepacking is doing any form of multi-day cycling in which bikepacking-style bags are used (i.e., bags that attach to the bike without rigid luggage racks). People doing lightweight tours on road bikes are now using the term bikepacking in this context even if they never venture away from paved roads, and so they’re not meeting the key criterion for the more standard Definition #1 above.

Commentary: I’m not a fan of the activity being named after the type of equipment being used, I’d prefer it to be defined by the mindset being adopted (again, lightweight and efficient bike touring), but otherwise this definition is also valid (and this alternative definition is noted on the re-directed Wikipedia bikepacking page).

Bike touring around Lake Constance by Kitty Terwolbeck.
Licensed under CC BY 2.0

Another definition of bikepacking is doing any form of multi-day cycling, regardless of what bags are used or surfaces are ridden. This is basically just replacing the older term bike touring (or trekking) with the more modern term bikepacking.

Commentary: I don’t like this usage because bikepacking should be reserved for a specific type of bike touring, it should not replace the more general term simply because bikepacking sounds modern and cool. Unfortunately, this is rapidly becoming the case and the photo on the right of a touring bike is an early result when doing a Google image search for ‘bikepacking’. 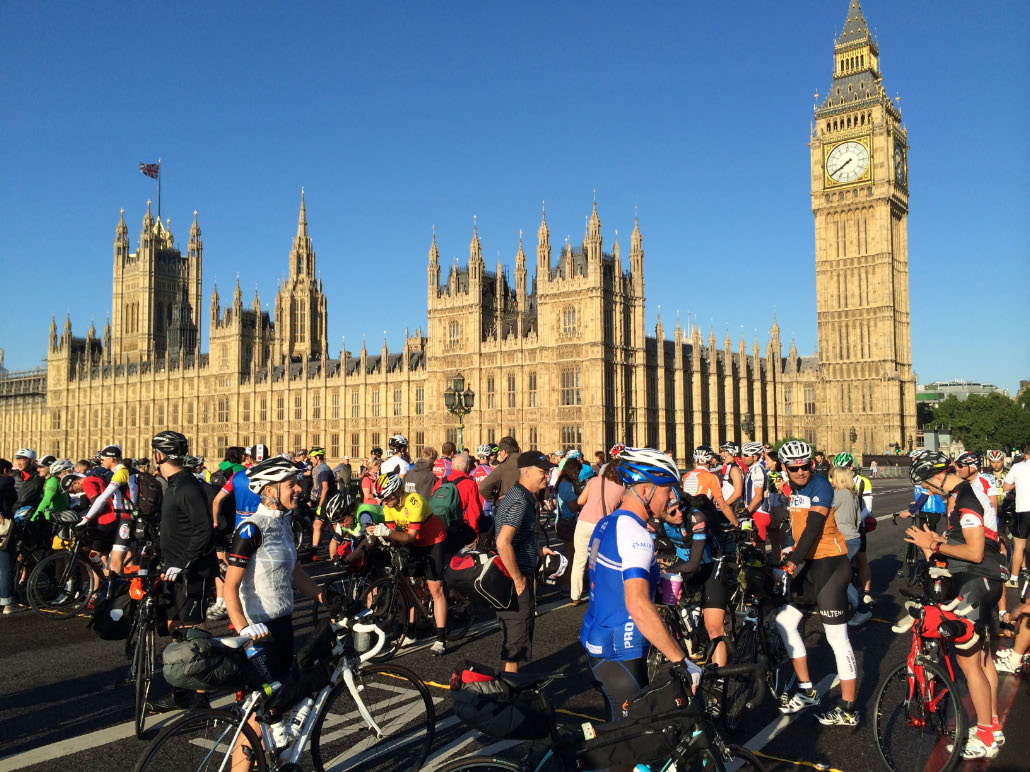 Start of the 2013 Transcontinental Race in London.

The definition I often had in mind when using the word bikepacking on this website is any form of multi-day cycling (regardless of surfaces ridden) in which a minimalist and lightweight approach is used to optimize efficiency and to travel as far as possible each day (regardless of whether in a race situation or not).

Commentary: There is a separate Ride Far page on the History & Definition of Bikepacking Races, which helps to explain where this definition comes from. Unfortunately, this focus on efficiency and optimization is not what people now typically think of when hearing the term ‘bikepacking’, so I may have to abandon or refine the way I use it on this site.

Other attempts to define bikepacking

A lot of confusion exists with these different definitions of bikepacking being used inconsistently and sometimes interchangeably. A good example of this is in a popular Facebook group simply entitled Bikepacking that introduces itself by trying to define bikepacking:

What’s bikepacking? The short answer: it’s backpacking with a bike. Longer answer: any ride that includes an overnight stay. This could be anything from ultralight singletrack tours to fully loaded dirt road touring …. This group focuses on off-road touring, away from cars. … We … are excited to promote this new and very exciting way to travel.

First, writing that bikepacking is “backpacking with a bike” is not at all helpful since backpacking is an even vaguer term that merits it’s own Wikipedia disambiguation page. The longer definition mostly relates to Definition #1, but they also mention the far more general Definition #3, which thereby includes Definitions #2 and #4, and this generality seems unnecessary and unwarranted. In addition, they are fools if they believe that bikepacking is a “new … way to travel”.

A lot of people share the misconception that bikepacking is something new just because the word hasn’t existed for very long. This style of riding, including what is now called ‘gravel biking’, has been common since the dawn of the bicycle, and although modern ‘bikepacking bags’ are using modern materials and designs, bicycle bags already existed in the 19th century that were not so different in concept. So bikepacking isn’t new, only the word is, and the latest surge in popularity is quite recent, but the concept and style of equipment are certainly not new.

I wrote most of the first iteration of this website in 2015-’17, when the term bikepacking was still evolving and certainly wasn’t mainstream and was still heavily linked to the bikepacking races. I’ve realized that I now need to revise the language used on this site to remove most references to bikepacking because it’s now become to mean mixed-terrain bike touring (or sometimes paved-road bike touring). I could alternatively change the focus of this site to be more about mixed-terrain touring in general, which would probably bring more traffic, but that’s not my goal, so I’ve chosen to leave that to other websites.

Unfortunately, I now need to find a different short-hand way to write ‘ultra-distance, self-supported bike races’, because that is really awkward to write repeatedly. ‘Ultracycling’ is already taken by the fully supported versions of such races, like RAAM, so do you have other suggestions? Or is the term “bikepacking race” distinct enough to have a different connotation to the more general term “bikepacking”? I’d love to learn what other people understand when reading the word ‘bikepacking’.

6 thoughts on “The varied definitions of ‘Bikepacking’”