VeloViewer is a website that takes your Strava rides and computes far more interesting statistics for each ride and some overall summary data that Strava doesn’t even come close to. I’ve been using it for a couple of years (see my summary data here), but I hadn’t paid much attention to the Explorer score until I saw this post on the VeloViewer blog this week.

Instead of motivating people based on the speed that they can ride Strava’s segments, the Explorer scores are not performance-based and instead, as the name suggest, reward people for exploring new roads and regions. The map is divided into tiles that are about 1.6 km high and 1.6 km wide (1 mile by 1 mile), and the system counts how many you have ridden through. There is also a score for the “Max Square”, meaning the size of the largest square of tiles in which you have ridden in all tiles.

Yesterday, I had a Max Square size of 12×12 tiles, but I saw that beyond this I wasn’t missing many tiles. I therefore plotted a route and today did a 150 km ride with 2300 meters of climbing (see it on Strava) that went through about 17 tiles that I hadn’t visited before, and by the end of the ride I’d boosted my Max Square size up to 16×16.

I certainly wouldn’t have ridden that far in December with an average temperature of 1°C, or have enjoyed it as much as I did without having the goal of maximizing my score. I also got to see some slightly different regions, new roads, and some nice views of the Alps. Unfortunately, there was quite a bit of fog in some sections, which is quite common for this time of year in the lower-altitude parts of Switzerland (see photos above). 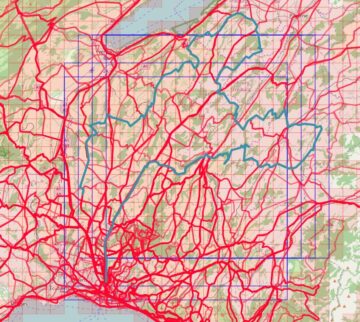 This image (click to enlarge it) is from VeloViewer and shows all the rides that I have recorded on Strava as red lines, today’s ride highlighted in turqoise (someone commented that it looks like a teddy bear lying on it’s side, but maybe it’s more like Mickey Mouse), my max squares are outlined in blue (there are now 5 different possible 16×16 squares that I’ve finished), and all of the tiles that I’ve completed are shaded in red, which is not so easy to see except on the lakes.

I won’t be leaving my Max Square size at 16×16 for long because there are only 6 more tiles that I need to increase my Max Square up to 21×21, so I’ll be focusing on this in some future rides. There is a leaderboard showing who has the highest score out of everyone who uses VeloViewer, and looking at the comments of the rides from the guys in the top few positions (there are some guys in Belgium with scores of almost 60), these spots are highly-coveted, but I would need to get to at least 24×24 to be in the Top 20. Unfortunately, I’m going to struggle to get above 21×21 because of Lake Neuchatel to the north and Lake Geneva to the south – I may have to hire a pedalo or kayak next year to tick off some of the tiles in the middle of the lakes, or I could do many more rides in the French Jura to extend my unbroken region of squares in that direction instead.

The other Explorer score shown on VeloViewer is a simple count of how many total tiles you’ve ridden through. I thought that my 22,000+ was quite impressive, but hadn’t expected to find myself in fourth place overall! (I’m listed as fifth, but the first person has a 150,000 km impossible single ride that has already been flagged, so should be removed soon.)

Since I won’t be preparing for and riding the Transcontinental Race next year, maybe my new focus will be on riding through more tiles. 🙂