My riding in 2017 was focused on collecting Veloviewer Explorer map tiles, which resulted in doing a LOT of climbing, but I also did a fair amount of distance. 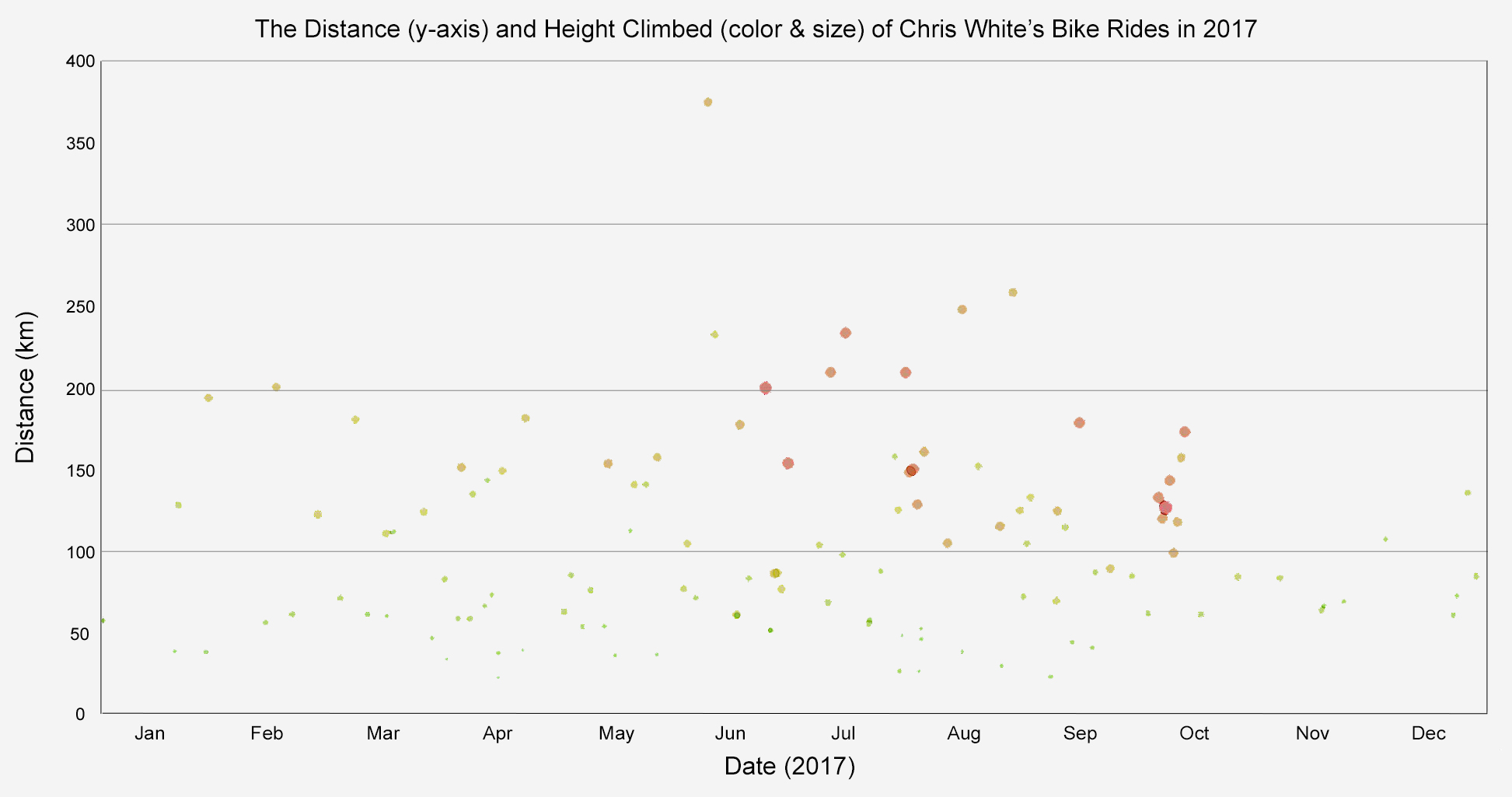 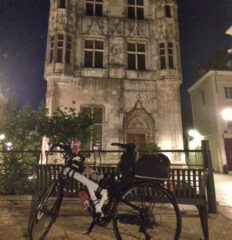 My rides are shown in the scatter-graph above (click to enlarge it). Ride distance is shown on the y-axis and height gain is indicated by the size and color of the dots. Rides shorter than 20 km are not shown.

I rode a total of about 14,000 km, or the same as from my home in Switzerland to Perth, Australia in a straight line. I did just 9 rides of more than 200 km, but November and December were the only months when I didn’t have at least one ride of more than 170 km.

My longest ride was 376 km, which I started after arriving in Paris at 10pm on a TGV train from Lausanne and I finished the next evening in St. Malo, Brittany, where I stayed overnight and got a ferry to England the next morning. I did that on an Airnimal Joey folding bike (shown in the photo) that I left at my parents’ house in England so that I can use it during future visits.

I climbed a total of 237,000 meters, which is about 62% of the way up to the orbiting height of the International Space Station. On average, I climbed the equivalent height of Mount Everest (8,848 m) every two weeks (and I once did that in just two days). On 33 occasions, I did more than 2,500 meters of climbing in a day.

The Stelvio Pass was the highest point that I reached, which is at 2,757 meters elevation. I did my longest continuous climb earlier that same day, going up the Gavia Pass from Edolo, which is over 1900 meters of climbing in one go (having started the day in Switzerland and summiting the Bernina Pass at dawn). I did that ride on my way to do the Maratona dles Dolomites cyclosportif / gran fondo event later that week, but the Bernina-Gavia-Stelvio day was the toughest ride of the trip.

My overall rate of climbing was an average of going up (and down) 17 meters for every kilometer that I rode (or 1700 m per 100 km / 90 ft per mile). This was one of my highest rates ever; in the previous few years I’d only done around 12 or 13 meters of climbing per kilometer. This means that the AVERAGE road that I took all year had a gradient of +/- 3.4% ! 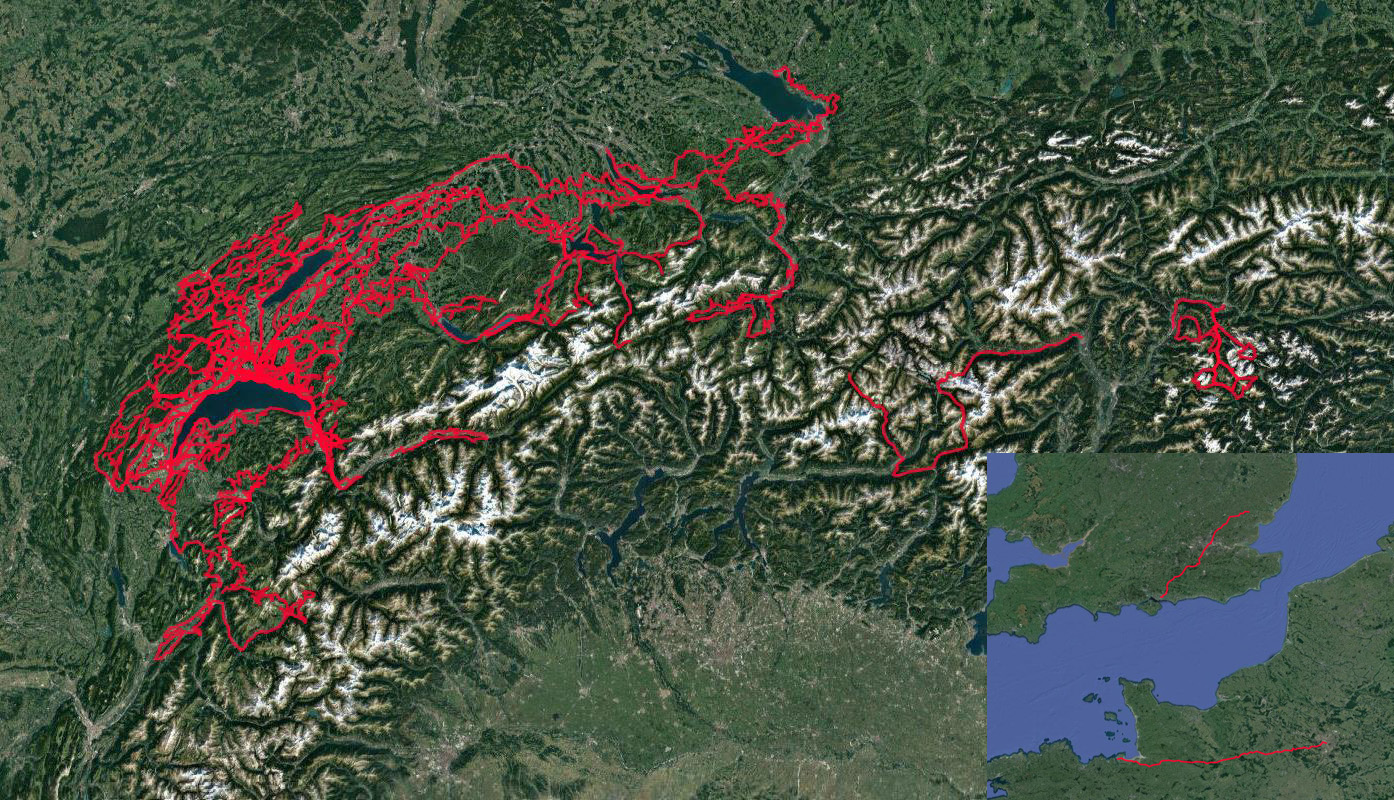 This map shows where I rode in 2017 (click to enlarge it; the inset of northern France and England is at a smaller scale than the rest). Most of my routes were far less direct and more squiggly than normal because of trying to improve my VeloViewer Explorer scores.

VeloViewer is an excellent website that takes your ride data from Strava and computes many interesting metrics and makes excellent graphical depictions from it (including the graphs and maps shown here). The feature that I like most on VeloViewer is the Explorer scores.

The VeloViewer site divides the map of the world into tiles that are about 1.7 km wide by 1.7 km high (tile size and where the divisions are is chosen quite arbitrarily, but it works well). Using GPS cycling data, the site can count how many tiles each user has ridden through.

The simplest of the VeloViewer Explorer scores is the Total Number of tiles that have been ridden through (shown by the tiny red and purple squares on the map below; click to enlarge it), for which I’m in the Top 10 at almost 24,000 (out of at least 10,000 people who use the site). There is also a score for the Largest Square region within which you’ve visited all tiles; I’m limited on this by some large Swiss lakes that get in my way (I need to start kayaking) but my score of 23×23 is in the top 1%. 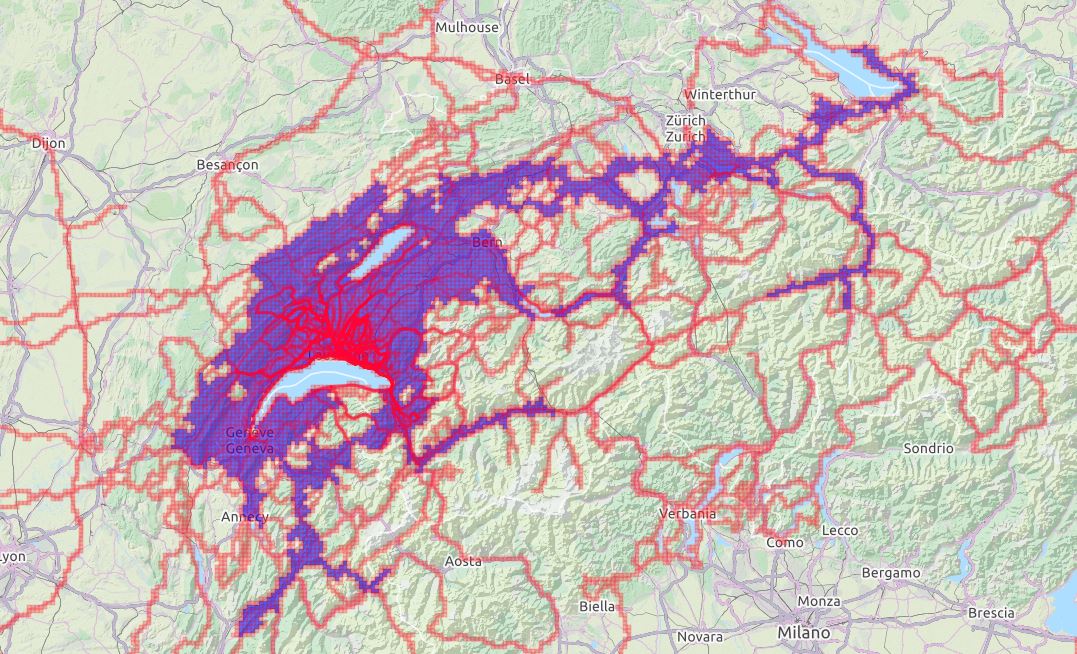 My favorite Explorer metric is the Largest Cluster of continuous tiles where you’ve also ridden through all four adjacent tiles (to the N, E, S & W). The map above shows the rides I’ve done since I got my first GPS bike computer in 2011, with my current cluster highlighted in purple.

My cluster score of over 4,000 was in the Top 5 for a while, but I’ve now slipped down to 7th. Fortunately, I’m not so concerned about competing with everyone else on these metrics; I’m more motivated by simply wanting to tick off every unexplored tile in my region and extending my cluster as far as possible. Pursuing these goals makes me discover some fantastic places and regions, many of which I might otherwise ignore.

The Alps make getting many tiles that are reasonably close quite difficult for me, with anything above 2000 metres altitude having very few roads and so difficult to access. However, because the Jura mountains to the west of where I live are much more accessible (with the highest point being about 1700 meters), they have proved to be an immensely satisfying tile-hunting playground this year.

I have done some riding up the wider Alpine valleys to extend my tile cluster and I’ve managed to continue it over several Alpine passes, including the 2,188 meter high Col du Petit St Bernard that crosses the spine of the Alps from France to Italy. I’m particularly proud that my tile cluster now extends into SIX countries: Switzerland, France, Austria, Germany, Liechtenstein, and Italy.

Focusing on riding through as many map tiles as possible has caused my go-to bike be an all-road / gravel bike that is almost as efficient on the road as a pure racing bike but that can also handle gravel roads and some occasional trails. The new Specialized Diverge with it’s minimal FutureShock suspension integrated into the steerer column and clearance for 35 mm tires with fenders or 40 mm without has been ideal. Given the length and steepness of some of the roads and paths that I’ve taken, very low gears are essential, with a 33-tooth chainring and a 40-tooth cassette being my preferred setup so that I can keep pedaling even on extended sections of 15% gradient, dirt roads.

Here’s the video that I made from my Alpine gravel biking trip through the northern French Alps in October, which I described in more detail in this blog post: Exploring the French Alps: Haute Savoie & Savoie.

My main race goal for 2018 is the TransAtlantic Way, which mostly follows Ireland’s Atlantic coast for about 2500 km. I’ve been told to expect lots of wind, rain, short, steep climbs, fantastic views and wonderful people.

I’m currently between jobs, so I’m not sure what else my new schedule will allow me to do, but I’m hoping to have time to do some ultra-distance one-day events like the AlpenBrevet and Tour du Mont Blanc, which each involve 270-330 km and 7-8,000 meters of climbing. Plus something flatter like a a 24-hour event on a race track like the Le Mans 24 Heures (which is effectively supported racing but without needing a follow car). 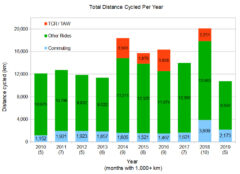 2010-’19: A Decade of Riding Far
I started bike touring over 20 years ago and have always marked the major routes that I've ridden on maps . At the start of 2010, I started logging my cycling more rigorously and by 2011 I had a Garmin computer and was using Strava. I've therefore logged almost all of the kms that I've ridden during the decade of the 2010s, so here's an extended look at that data. I did this mostly for my own amusement, but maybe others will find it interesting. Click on an image to see the full-size version. Totals and yearly/monthly variation During the… Read More ...