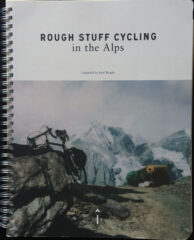 If you like Riding High as well as Riding Far and you like to get off of the regular paved Apine passes then the Rough Stuff Cycling in the Alps book by Fred Wright contains invaluable knowledge. It’s available for about 25 UKP from Pannier or Amazon UK.

The knowledge has been compiled starting back in the 1980s by E.D. Clement and then later added to extensively by Fred Wright. This book is mostly a re-print of the book that Fred published in 2002. Max Leonard is the man responsible for now getting it re-printed via a successful KickStarter campaign.

Rough stuff cycling is a term used mostly in the UK that existed well before the term “mountain biking” started to be used in California; it referred to people riding whatever bike they had on rough roads, trails, etc. Given the popularity of the modern incarnation of this desire that’s often referred to as gravel biking and bikepacking, the book should have a reasonable-sized audience. 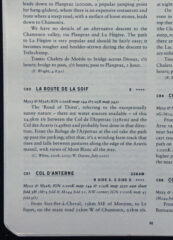 I was an early KickStarter backer, then I gave some input about certain routes, some of which I’m proud to say Max has added to this edition, see the image for one example. Will Davies (who runs the excellent Cycling-Challenge website that contains lots of similar information) also made extensive contributions.

Overview maps provide indices to the routes described, but you’ll need to consult proper maps to follow any of the routes. Many of Fred’s photos from his trips are also included (thankfully, the KickStarter project raised more funds than expected, which allowed these images to be included). 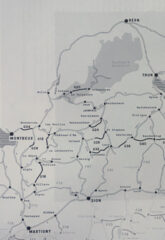 The text is very concise and factual; it describes how rideable each pass/route is and occasionally mentions what scenery can be expected. The routes are rated based on difficulty and beauty.

Be warned, many of these passes require pushing and/or carrying your bike along hiking trails for extended sections. There are some routes that are straightforward dirt roads, but many are very challenging. I know from experience that even those rated as being relatively easy in the book are still pretty tough, but I generally agree with the relative ratings for most of the routes that I know about. 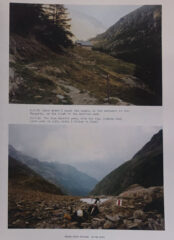 I already noticed a few route descriptions that need updating (that I wasn’t aware of when giving my brief input). I therefore hope that this won’t be the last edition and that the information can continue to grow and improve. Online tools and reports are useful, but nothing beats a well-researched, printed book.

I love this kind of riding/exploring and the book is inspiring me to plan ever more adventurous trips into the Alps. If you have a desire to explore what is beyond what you previously thought were dead-end Alpine valleys then this book is for you.