This is a breakdown and summary of all of the cycling that I did during 2015. Note that clicking on an image will enlarge it.

I had been riding even more in preparation for the 2015 Transcontinental Race than I did for the 2014 Race, having done 9,000 km in the first 6 months of the year (an average of 1500 km per month). This culminated in my second-longest ride ever, a 405 km epic from Leichenstein across Switzerland to end in Geneva. That was even more special due to doing it with three good friends – Alan (whose idea it was), Alain, and Graham.

Unfortunately, that was when my season peaked because it was during the week after that I started to experience sciatica pain. I therefore took it a bit easier in the 4 weeks leading up to the TCR at the end of July, but was only able to complete one week of the TCR before being forced to scratch due to my back issues becoming worse (see my race report).

After the TCR, a doctor told me to rest, so I took it much easier for the remainder of the year except going on a bike tour in October with my wife on our tandem, in which we started in Barcelona and went over the Pyrenees and through the French Massif Central region.

My final distance ridden during the year was 15,769 km (about 2,600 km less than in 2014) and 169,000 metres of climbing. This included 16 rides of more than 200 km, 6 of which were during the TCR. Like the previous year, I did more rides of over 200 km than I did rides that were under 50 km, of which there were just 14 (not including commuting). The length of each ride is shown in the second graph on the left, and the frequency distribution of ride lengths is in the third graph.

Also shown on the left is a map showing all of my rides this year. If you want to see any more details about specific rides then see my Strava profile, or my VeloViewer profile. VeloViewer is the site that I used to make most of these images and I highly recommend using it if you want a more powerful tool to analyze and visualize ride data; everything is imported from Strava so it is simple to do. 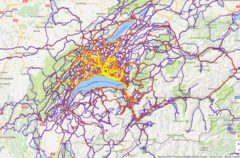