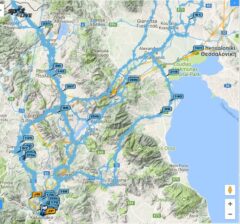 The information is presented across two pages:

Antonin Michaud-Soret of AHSTUDIO, the official cinematographer, made 12 “daily shorts” of video footage from the race and five “feature edits“. A couple of the best of these are below:

Netwerk Geraardsbergen posted videos of registration and the start. Belgian television station RTBF made a video following three riders from Quebec (in French). There is also an unofficial live feed from the start plus official live feeds of James Hayden and Melissa Pritchard passing through CP3 and also one from the finish party.

The organizers posted many race reports during the event: Race report 1, 2, 3, 4, 5, 6, 7, 8, and 9. The Behind the Scenes blog highlighted the work of the volunteer dot watchers who monitor the progress of every rider throughout the race. The race’s title sponsors, PEdAL ED, posted a summary of the race on their blog.

The general cycling news website road.cc posted frequent updates throughout the race and an article focused on the winner, James Hayden. On the Ride Far blog, there is a race preview and an update posted about 13 days into the race. There is another good race preview on The Human Cyclist blog. See the previous page for a general summary of the major highlights and an analysis of the routes used.

The Guardian newspaper posted an article about the TCR online, which even includes a mention of this Ride Far website. After the race, the French long-distance cycling magazine 200 included several articles about the race in issue 14 (the “automne 2017” edition).

There are also many unofficial albums of general photos, including the registration and start and the finish. Mikko Makipaa, the only person to have started all five editions of the race, posted albums of participants and rider’s bikes. Chris Dennis, a TCR veteran who didn’t race this time, posted photos to Facebook of typical rider experiences depicted in Lego.

The tables below contain detailed analyses of the results and links to rider reports. They are designed to be viewed on a computer screen and may not display well on smaller screens.

The official results are available on the TCR wesite. The tracker data can be viewed on the TrackLeaders or Free Route websites. One of the riders, Urs Arnold Kutschera, also created a useful tool to analyze certain aspects of the tracker data, see here.

In addition to the results and tracker data, the tables below contain information gathered from the participants’ public ride reports and publicly-viewable social media accounts, links for which are given for each person. Riders are divided into the same categories as in the official results, but some parts are organized slightly differently.

To receive an official finish time and appear in the general classification, participants had to abide by all race rules, reach the finish before the official closing time and not ride with others for any significant length of time. This was the case for 94 solo riders and 9 pairs. Time penalties were awarded to these people for minor rule violations, presumably for using banned or illegal roads.

The official finish positions are reported in the tables in the “Pos’n” column. The “Rank at CP” column shows the unofficial rank at each checkpoint (CP) and the finish (F). The CP ranks don’t include penalties and involve a different subset of riders for each category, with the subset chosen to make the relative progress through the field as clear as possible.

17 solo riders reached the finish after the official closing time, so are listed as “finishers” without receiving a position in the general classification. Two solo riders finished within the time limit but were listed as finishers and not included in the general classification due to undisclosed minor rule violations. There were therefore a total of 113 solo finishers, and it is this subset that is included in the CP ranks listed for all solo finishers.

Even more detailed results, in particular for the time taken between each checkpoint, are given in this blog post, but I recommend most people to only look at the tables below.

Eight people who started the race in a pair finished as solos, so it’s difficult to compare their performance to people in any other category, so the additional rankings for them include all 282 starters.

Scratched / Did Not Finish

136 people scratched from the race before reaching the finish. Rankings are listed for them based on all 282 starters and they are ordered based on their rank at the last checkpoint that they reached or by their race number.

Of the 282 starters (224 of whom were solos and 58 started as pairs), 268 made it to CP1, 244 to CP2, 180 to CP3, 159 to CP4 and 146 to the finish. Including all starters in the rankings therefore causes people who are making consistent progress relative to everyone else to appear to be advancing because their position improves at each checkpoint as other people drop out, which is misleading but unavoidable.

Comments are made for notable performances or incidents. Reasons for scratching were collected from public ride reports and publicly-viewable social media (including the TCR Facebook group, which requires a non-restricted registration to view). The original sources are either specifically given in the comments or are from the links given in the “Ride reports” column. Reasons for scratching are normally a lot more complex than the brief statements given here, so I recommend reading the reports to better understand each individual’s unique situation.

* Requests for results corrections should have been made to the race organizers before mid-November, 2017, but since then I’ve noticed minor inconsistencies in the data in the official results for six people, who’ve I’ve marked with a star next to their name. The race organizers are looking into this but the results displayed here are based on the current official results.

If you have a published ride report or you used a specific hashtag in your social media for your TCRno5 posts and I have not included it in these tables then please Contact Me.

The application process took place in mid November 2016 and was similar to that used for the 2016 race with the main difference being that due to the number of race veterans continually increasing, veterans were no longer given automatic entry. Read more about the process in this blog post. It appears that 250 solo starting places and 50 pairs places were available, for a total of 350 people, with successful applicants being informed by the end of December, 2016. In the end, 282 people made it to the start line.

A competition was announced in early December 2016 in this video for one specific starting place along with equipment from the clothing brand PEdAL ED. It was called the #171 competition because that had been the race number of race veteran Jacopo Porreca, who was now working for PEdALED and helping with the race. Entrants had to record a 200 km ride and create a video explaining why they should win. The videos were put in this YouTube playlist and people voted for their preferred entry. The results were announced in this Facebook post with the Turkish rider Berk Okyay winning. All entrants were actually given a starting place, and 12 of the 15 made it to the start 7 months later.

This was the first year that all participants’ bikes had to undergo a safety check in Geraardsbergen prior to receiving the satellite tracker. The check focused primarily on whether the bikes were equipped with appropriate and functioning brakes and lights.