This page contains information about the 2020 Transcontinental Race, which was originally called TCR No. 8, but was cancelled due to the disruption of the Coronavirus pandemic. In 2022, TCR No. 8 finally went ahead. See the Overview page for a general introduction to the Transcontinental Race (TCR). See also the official TCR page.

Rough details of the original 2020 TCR No. 8 race were announced at the launch event at Look Mum No Hands in London, UK in late November, 2019. Registration was open for two weeks in November and December, 2019. Applicants were informed in early January 2020 whether they had been awarded a place.

Travel restrictions and lockdowns started throughout Europe in early to mid March 2020 and before the end of March the organizers announced that the 2020 TCR was being postponed for a year but the ongoing Coronavirus disruption caused that to again be cancelled (see the page 2021 Transcontinental Race (cancelled)).

The start and finish locations from TCR No. 7 were to be used again in the 2020 TCR, but the direction would be reverted back to the traditional west to east format. The start had been planned for the final weekend of July 2020.

The total distance was expected to be similar to the longest ever TCR in 2015 of about 4,200 km. However, the amount of climbing would have been significantly more than in 2015 at over 40,000 m. The finish party was planned for the end of Day 15.

The 4 control points were as follows, and are marked on the map below.

The start location and CP1 were to be retained in the 2021 version, which was subsequently cancelled. For the 2022 edition, which did go ahead, CP3, CP4 and the finish location were retained. 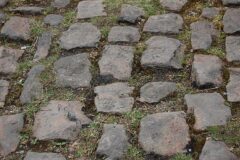 2021 Transcontinental Race (cancelled)
Outline of what is currently known about the route and application process for the 8th edition of the Transconinental Race in 2021 (postponed from 2020). Read More ...