This page contains information about the 2021 Transcontinental Race, which was cancelled due to uncertainties about international travel caused by the Coronavirus pandemic. The organizers plan to hold the event in 2022, with details to be announced in November 2021. See the Overview page for a general introduction to the Transcontinental Race (TCR). See also the official TCR page.

TCR No. 8 was originally scheduled for July/August 2020 (see the previous page), but due to the coronavirus pandemic, the organizers announced in late March 2020 that the race would be postponed until the same time in 2021. In late December 2020, details of the replacement event were announced with the new route minimizing the number of border crossings and remaining within the Schengen region to maximize the chance of the race happening with minimum disruption while still crossing a large portion of the continent. Continued uncertainties concerning international travel caused the organizers to cancel the 2021 event in late May 2021.

Brest, France was the finish location for TCR No. 7 and had already been planned to be the start loaction when TCR No. 8 was originally planned for 2020, so it was retained for the 2021 version. The new finish location was in Thessaloniki, Greece. The only other country to be visited was Italy, with riders taking a ferry across the Adriatic Sea between southern Italy and northern Greece.

Ferries had featured in the first 3 editions of the TCR, in 2013-15, but had not been allowed since then. The race started in London, UK in 2013 and 2014, and so participants had to take a ferry across the English Channel. In both of those years and again in 2015, riders could choose to take a ferry across the Adriatic Sea from Italy, but it had been debatable as to whether or not this was time efficient. In general, the faster racers almost all chose to take the overland route, but particularly in 2014 a significant number of the mid-pack riders took the ferry over the Adriatic.

The 1st control point for the cancelled 2020 version of the race was retained, but the other 3 control points were changed so that riders only needed to visit 3 countries.

In December 2020, all riders who had accepted a place for the 2020 TCR were given the opportunity to race in 2021 or receive a full refund; places could not be transferred to a later edition. New applications were invited in early 2021, but only from people of under-represented demographic groups. When the event was cancelled in May 2021, the organizers announced that they will be accepting new applications for the 2022 event after the details are announced in November 2021. 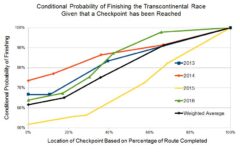