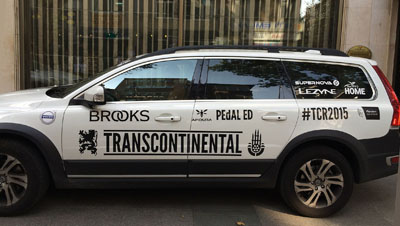 UPDATE (12.1.18): Full race details are now available, please see the complete page about TCR No6, 2018. This post serves as a look back at what happened during the month leading up to the full announcement.

As of 12th December, 2017, there still hadn’t been an official announcement about the Transcontinental Race No. 6, so I wrote this post about what was known at the time. More details were announced in the subsequent weeks, so I’m updating this post each time that new information is released.

The official TCR website contains some of this information and the announcements are normally made on the TCR Facebook page. For a general introduction to what the Transcontinental Race (TCR) is and the principles that it was founded on, see the TCR Overview page on this site.

UPDATE (16.12.17): The team has confirmed that TCRno6 is happening in 2018 and that the start will again be in Geraardsbergen, Belgium. Instead of being on a Friday night or Saturday morning, as before, for the first time it will be on a Sunday: 29th July, 2018. They promise that more details about checkpoints and registration will follow soon. This is excellent news, and means that Mike Hall’s legacy can keep inspiring people.

See below for conjecture about where these might be.

Mike Hall, the race’s founder in 2013 and race director, unfortunately died in a collision with a car in late March 2017 while taking part in the inaugural Indian Pacific Wheel Race. Planning for the 2017 edition of the TCR was postponed while everyone mourned the immense loss and there were fears that the race would not happen.

There couldn’t be any bigger memorial ride for Mike than riding the race that he founded, so fortunately a team was able to organize everything in time and it was announced in early June, 2017 that TCR no5 would go ahead as planned, with the start happening on the evening of Friday, July 28th, 2017 in Geraardsbergen, Belgium. Read this article on Apidura’s blog to know more about this process and the organizing team.

The race experienced another tragic loss when a Dutch participant, Frank Simons, was hit by a car and killed just a few hours after the start of the race in Belgium. It was initially not clear if the race would be cancelled, but with the encouragement of Frank’s family, the organizers took the difficult decision to continue.

In previous years, route details for the next edition of the race have often been announced in late October or early November and race registration has been open for a short period after that, with successful applicants being informed around the New Year. This year, there was no news until 1st November, 2017, when the following announcement was posted on the official TCR Facebook page:

This is encouraging news and Mike’s family, who inherited the race, have said all along that they want the race to continue and they were part of the team that organized the 2017 race. It therefore appears that they are working towards establishing a sustainable future for the race’s organization going forwards, but this appears to be taking longer than is ideal.

The race has nearly always started during the last weekend in July and despite the delays in announcements and registration, it’s unlikely that the race timing will change significantly, but anything could happen (UPDATE, 16.12.17: The start date has been announced as Sunday 29th July, 2018). The number of participants accepted has slowly risen every year, with at least 300 being given a place for TCR no 5, but with typically around 1,000 applications being received, it’s not easy to get a place, and even race veterans are no longer guaranteed entry because there are so many of them.

The uncertainty surrounding the TCR for 2018 has caused many people to consider entering Other Bikepacking Races, of which there are more options than ever.

Juliana Buhring, who was the Race Coordinator in 2017 and is an accomplished race veteran, posted a photo on Facebook of her doing a checkpoint recon’ ride with her friend and fellow TCR veteran Emily Chappell. It is therefore likely that the checkpoint, start and finish locations have been decided and that it is the organizational aspects that are causing the delays.

I enjoy playing the game of guess-the-checkpoint-locations, so here is my best attempt. Please join in in the comments below!

A few vague hints can be gleaned from this photo of an “epic climb”: The road edge is in good condition which suggests that it’s more likely to be in the Alps than the Balkans and it’s not on a major route. The lack of vegetation suggests somewhere above 2000 meters altitude. If anyone is very good at recognizing regional differences in the style of road edging stones then those may be another clue.

On previous TCRs, they’ve varied the countries visited and the two major Alpine countries that haven’t yet had a checkpoint are Slovenia and Austria. Slovenia’s highest pass, Vršič is not high enough and has too much vegetation to be the subject of this photo.

I’m therefore guessing that Austria may get a checkpoint in the next edition, and if that is the case then the Grossglockner High Alpine Road would be the most natural choice of climb. Unfortunately, the Google Streetview car hasn’t gone over that road, but the images available do show very similar edge stones to those in Juliana’s course recon’ photo, so that’s my best guess. Unfortunately, I have no inside information, this is mostly guess-work with a bit of sleuthing. Please let me know what you think.

UPDATE (23.12.17): A second teaser photo was shown in the second Facebook post shown above. The road looks similar to the one shown in Juliana’s photo, but it may not be the same. I cannot find any section of the Grossglockner road that corresponds to that image and I looked at a lot of other possible locations without finding anything that matched well.

UPDATE (31.12.17): For the other two teaser photos, the first is quite vague and corresponds to many regions of hills and forests in Europe.

For the image of the narrow road going up through a more barren valley, some sleuthing on the TCR Facebook Group (see here) has revealed where it is – congratulations to Mike Sheldrake for being the first one with the correct answer. No-one is naming it specifically yet, but it’s a dead-end road that rises above 2000 metres in a region where I love cycling. I’ve been close to the base of the climb a couple of times and depending on where the previous checkpoint is and where the required parcours for this climb starts, it might encourage people to tackle an extremely steep road that contains a section with 15% average gradient for 2.5 km just to get to the base of the checkpoint climb!

I expect that the general route will remain the same as every edition so far, going from NW Europe to SE Europe. Geraardsbergen, Belgium has been the start for the previous 3 editions of the race and the town does a great job of welcoming the event, so I wouldn’t be surprised if the start is there again (UPDATE, 16.12.17: Geraardsbergen, Belgium has been announced as the start location). After the finish being the same for the first 3 editions of the race (in Istanbul, Turkey) it has moved for each of the previous two editions; so I’m not sure what will happen this year, but it could well be beneath the Meteora monasteries in Greece again to keep things simpler for the new organization team. (UPDATE, 31.12.17: Given the location of one of the teaser images for the checkpoints then it looks like the race will be heading towards a finish somewhere in eastern or south-eastern Europe again).

I expect that the number of checkpoints will remain at 4, as it has been for the previous three editions. Based on the pattern established in previous years, there is likely to be one checkpoint before the Alps, one or two in the Alps and one or two in eastern or south-eastern Europe. This map shows all previous locations used. I have almost no idea where the other 3 checkpoints will be, but I have heard that Emily Chappell enjoyed her visit to Albania in the 2016 race and may be responsible for a checkpoint being held there at some point in the future, with Llogara Pass being a possible climb option.

Are you planning to enter the race? Where do you think the checkpoints might be?

EDIT: Despite not many people commenting below, lots of people have commented on the Facebook announcement of this post and the version shared to the TCR Facebook group, with quite a few people agreeing with my theory about the Grossglockner road.

I was correct in predicting that the start and finish locations would remain the same as in 2017. My boldest prediction was, based on Juliana’s recce’ photo, that the Grossglockner Road in Austria would be a checkpoint. Although there is a checkpoint on a toll road in the Austrian Alps above 2000 meters elevation, it is not the Grossglockner but instead it’s the Bielerhöhe Pass. The Grossglockner is a viable route to get between CP1 and CP2, so I’m sure that some people will ride over it.

Once teaser images were shown, it wasn’t long before we knew that the climb up to Mangart in Slovenia would be a checkpoint. One day before the full route announcement a teaser image was shown of an unpaved climb; I stated in the discussion in the TCR forum that I expected this to be somewhere in SE Europe, probably Croatia or Bosnia and in fact it was the Bjelašnica climb in Bosnia. Just hours before the full announcement was made, another teaser image was released and people quickly identified it as being in the Karkonosze Mountains between Poland and the Czech Republic.

So, all of the information was there for people who were paying attention but it was very useful to have the complete details in the official announcement.